The Top Ends leads the way in a drive to crank up economic development in the nation’s north, with Central Australia clearly a late starter.

Will The Centre become a well-adjusted, harmonious community that’s celebrating its diversity and making a motza from its social and natural attractions? Or will much of it remain welfare dependent with dire consequences of sickness, crime, poverty and hopelessness?

The question is out of the too hard basket: Prime Minster Tony Abbott wants to develop The North and its three states are drawing up wish lists.

In the NT Infrastructure Minister Peter Styles has ordered a $1m study of “regional infrastructure supporting economic development across regional and remote parts of the Northern Territory over the next 30 years”.

Is Central Australia ready for this? It doesn’t look like it. Here it looks like the cart is being put before the horse.

Infrastructure needed by the two scenarios differs greatly: More facilities for police, ambulance staff, nurses, doctors, magistrates, judges and prison officers on the one hand; and on the other, hotels, well serviced parks, entertainment venues, museums and public spaces that are fun to be in.

The usual suspects are circling to get their slice of the action: Mining, oil and gas interests; the cattle, transport and shipping industries. But it seems a pitch is still a work in progress – or maybe not even that – for those sectors in The Centre that are pivotal in getting people into jobs and, consequently, out of trouble.

That’s exactly what the Central Land Council’s Centrefarm is not doing, using mostly transient labour from interstate on its Ti Tree and Ali Curung plantations.

By contrast, the Northern Land Council (NLC) has “has gone into something almost like a partnership with the government, to pursue economic development,” says Mr Styles (pictured).

“Take the Tiwis, for instance. The government is looking at communities who want to engage, and these people seriously want to engage.

“They are a good role model, a classic example, a model we’re hoping that other people in the Territory will take up.  We’ll have to do similar things at Maningrida.”

The NLC has handed land over to the Land Development Corporation – some 10,000 hectares, on a 99 year lease – asking the government “to talk to players anywhere in the world, hotels, eco tourism, that sort of stuff,” says Mr Styles.

“And that’s what’s happening. They are actually working with government, and government services, to develop economic activity.”

Another Top End example: Treasurer Dave Tollner says a major Australian sandalwood supplier, Tropical Forestry Services (TFS), will develop plantations in Katherine and Douglas Daly, aiming over the next four years to become the largest supplier of sandalwood products in the world. 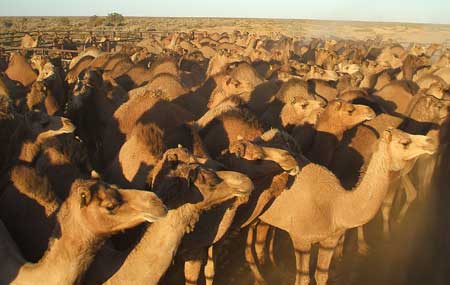 TFS has already invested over $40 million in the Territory, says Mr Tollner.

We asked Mr Styles whether there are similar proposals from Central Australia that are feasible, credible and adequately resourced. He said specific development projects may go thorough a whole range of departments but he wasn’t aware of any.

An exception is Ben Passmore from Centre Bush Bus who is “is busting his rear end to get people out to places” such as Haasts Bluff and Santa Teresa.

As the minister who is instructing consultants GHD – which has a November deadline for the study – Mr Styles seems resigned that the study will be starting from scratch in The Centre – extracting industries excepted, “of which there are a lot near Alice Springs”.

He says one mining company would take up the entire freight capacity on the Ghan line, given its current number of passing lanes. Companies will be encouraged to share the costs of upgrading the line, as INPEX is doing with transport infrastructure near Darwin.

We asked Mr Styles: Are there indicators of a Tiwi style situation unfolding in Central Australia? If not, why make a study of infrastructure required for developments that may never occur?

“I don’t have a crystal ball,” Mr Styles says. He wants locals to “come forward with proposals where we can help generate that.

“GHD will be traveling out there. They’ll be talking to people. They’ll generally say, well, what do you need?

“We do business a bit differently than even the previous CLP Governments. We’re about sitting down and talking with people, and finding out, what do you want to do?

“Wealth generating projects is where the previous government should have spent its money.”

As The Centre is sitting on its hands there is no wonder that development efforts are “top heavy”: Chief Minister Adam Giles and Federal Infrastructure Minister Warren Truss this week announced a $106m road upgrade program.

Only one of the six roads is in The Centre. And, no, it’s neither the Tanami Road nor the Mereenie Loop, both with key roles in the tourism industry. Why it is the Santa Teresa road (upgrade and sealing of various sections) is not explained in the release. The others are the Roper Highway, Port Keats Road, Arnhem Link Road, Buntine Highway and Central Arnhem Road.

The Alice Springs Town Council is equally unaware of any grand schemes the local captains of industry may be hatching.

The council has only just formed an economic development committee. It had its second meeting this week. Chairwoman Liz Martin – herself the CEO of the highly successful National Road Transport Hall of Fame – says “not much” is going on: “It certainly seems we tend to sit back and wait for someone else to do it for us,” she says.

Mr Styles says in the Top End “there’s been a shift in the last five years. People don’t necessarily say, give me the land and give me a Toyota and give me money and I’m going to sit down.

“These people seriously started to wake up that their way out the quagmire, for the majority of their people, is through economic development.”

And he says it’s now well and truly Northern Australia’s turn to get some national attention: “There have been 150 years of development in [the densely populated] parts of Australia, but we are the poor cousins up here.

“We need some assistance through the North Australia Development Plan.”

Photos: A million camels are waiting in our deserts to be mustered and sold. No takers so far. An organistion asserting to be Aboriginal, Ninti One, is having them shot from the air, leaving them to rot. A mining rig in Central Australia: Extracting industries seem set to make their case in the $1m regional infrastructure study.

The Territory Government is providing more land for homes in Alice Springs, including $8.3m for release of another stage of Kilgariff Estate, according to...
Read more
Issue 9

Jimmy Cocking is clearly taking his pitch for Mayor and Councillor later this year more seriously than most: To gain a second term in...
Read more
Issue 9

By ERWIN CHLANDA After a tough year of Covid obstacles the resource industry in the NT is embarking on a string of “exciting” projects, according...
Read more