Home Issue 5 Stuart statue: should council give it back?
Issue 5Issue 6Issue 7Volume 21

Stuart statue: should council give it back? 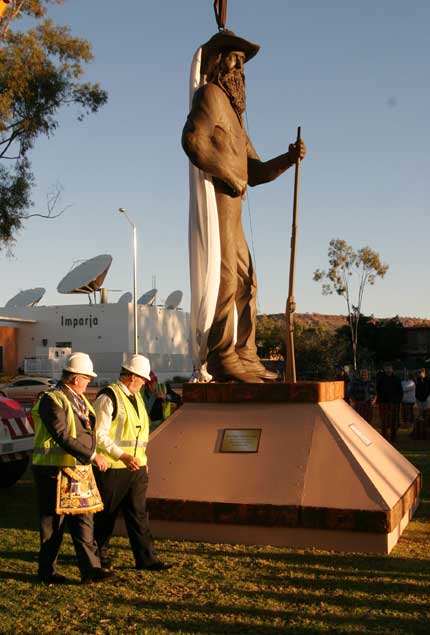 It’s a gift that has come to haunt them and at least the executive seem to have had enough:  last night it recommended to town councillors that they give the John McDouall Stuart statue back to the Freemasons.

One councillor, Jade Kudrenko, thought this was a good idea, an end at last to a controversial, at times farcical process now in its fourth year. The others were not so sure.

Left: The statue being lowered into place for its temporary unveiling in 2010, Grand Master Brother Ray Clark and Mayor Damien Ryan in the foreground.

Giving the statue back would be a major loss of face, but the ‘gift’ now comes with a price tag. Originally the Masons promised that they would cover installation and maintenance costs but they are no longer playing ball, in an apparent pique over the placement of the statue.

Cr Eli Melky, usually one to challenge anything that looks like unnecessary expenditure, was prepared to brook this, although he suggested some money could be saved, such as the allocation for plaques ($2000).

The Freemasons offered the five metre high statue, crafted by local folk sculptor Mark Egan, in a meeting behind closed doors in March, 2010 – the sesquicentenary of Stuart’s first expedition into the Centre. The public were finally let in on the surprise two weeks before the unveiling. The statue was to have pride of place on the south-western lawns of the Civic Centre (opposite KFC).

There was uproar, with strongly aired views for and against the placement of the statue, with a particular focus on the fact that Stuart was depicted carrying a gun. It was a useful public debate about how to represent our history and about how decisions should be made on works of art and memorials destined for the public space.

In the face of the controversy, council backed away from the Civic Centre location, proposing Stuart Park instead. That opened another can of worms: getting the requisite approvals for the heritage site. In any case, the Masons – particularly Worshipful Brother Les Pilton, instigator of the whole project – have not been happy with the alternative location, no longer even responding to correspondence from council.

Last night Mayor Damien Ryan wanted to remind councillors of “a bit of history”, although it sounded more like a rewrite of history. He would have it that the real reason for not having the statue on the council lawns was that Mr Pilton wanted it in the middle of the south-western corner which would have restricted future uses of that location.

Mayor Ryan wanted to see council take ownership of the statue and install it. Cr Brendan Heenan also wanted to see it in place, as a tribute to the explorer.

Finally a motion was put that council write to the Freemasons to inform them of council’s intentions to install the statue at the approved site as soon as practical. CEO Rex Mooney said the letter could be written immediately if there was unanimous support. However, Cr Kudrenko maintained her opposition so the matter will be again up for debate at the ordinary meeting at the end of the month (February 24).

In an interesting footnote to the saga, the paperwork last night revealed that the Barkly Shire Council offered to take the statue off council’s hands. This was considered in confidential business on July 30, 2012, with councillors voting to decline the offer.

The issue of public art came up twice more last night, with Cr Kudrenko showing her keenness for clear processes to be followed. She requested a copy of the public art commissioning process flowchart being prepared by council’s Community and Cultural Development officer, Leon Tripp. She said it would be relevant for considering the commissioning of the Traeger Park Mural, done in haste last year ahead of a major sporting fixture at the park.

Now another project is being mounted in haste, although any issues will be mitigated by the work not being permanent.  Mayor Ryan wants to see young people making temporary public art using materials recycled from the landfill in time for National Youth Week in April. Cr Kudrenko welcomed the “wonderful” idea but wanted to know who would be facilitating the process.

It seems that councillors would be, liaising with schools to receive proposals from students, giving them the tick or flick, and possibly offering some financial support.

Below: Local Freemasons at the temporary unveiling in 2010. 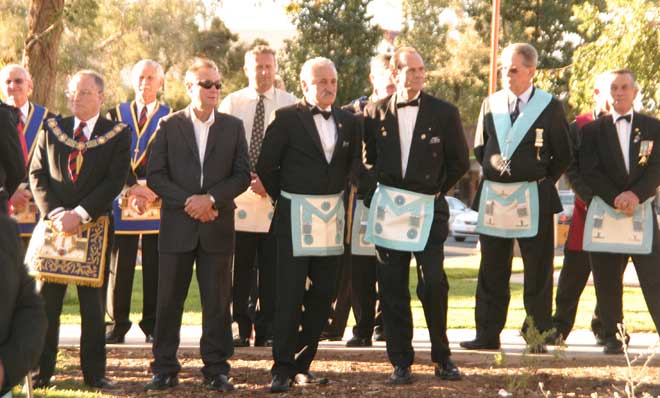 See our foundation archive for detailed reporting on the  Stuart statue saga and other coverage of the sesquicentenary in 2010. The links take you to the issue; scroll down to locate the story.

Giant statue agreed to in secrecy and in haste

One comment piece is missing from the online archive. It was published in the print edition of August 5, 2010, and referred to in the main article of that date, ‘Freemasons’ Stuart statue: Comic opera’. I reinstate it here:

How to remember our history: a conversation we have to have

The celebrations in April of the 150th anniversary of John McDouall Stuart’s first foray into Central Australia navigated the sensitive terrain of how to represent this history by programming a series of fairly low-key events. These included well-attended historical lectures and public fora in which Aboriginal people were invited to participate.

The most upbeat of the events was the reenactment of Stuart’s arrival and the concert at Simpson’s Gap, a quietly joyful occasion. If the difficult issues of the colonial past were largely avoided in the program, so was any tone of triumphalism.  It was the courage, tenacity and fortitude of Stuart and his companions, William Kekwick and Benjamin Head, that were celebrated, not their colonial mission, other than by recognition that it paved the way for other Europeans to come into this beautiful and challenging part of the world.

These may well be the sentiments behind the desire of the Freemasons to mark Stuart’s memory by a giant statue. But at four metres high on a one metre high pedestal, making for an imposing five metre edifice, its visual language harks back to a view of history as an ongoing chronicle of the singular feats of great men.

The statue, created by Mark Egan, attempts to express Stuart’s greatness mainly by size and a certain ruggedness of character, underlined by the choice of materials (steel frame with ferro-cement overlay). Stuart is also depicted carrying a gun.

Several speakers at last Friday’s public meeting of the Public Art Advisory Committee acknowledged the importance and interest of the Stuart story, their appreciation of the earlier anniversary celebrations as well as the generosity of the Freemasons’ intentions, but the appropriateness of the proposed representation was questioned from several points of view.

Pip McManus, artist and former committee member, said its visual impact and symbolism were unsuited to a 21st century representation.
She linked it to the “Big Art” tradition in Australia (Big Banana, Big Pineapple etc), but suggested that such pieces are best located on highways and near roadhouses, as are – at Aileron – Mr Egan’s Anmatjere Man, Woman and Child. Her comments on ‘Big Art’ inevitably drew sniggers, even if Ms McManus did not intend them to.

Fearing perhaps disrespect to Stuart’s memory, Brian Nicholls, a man familiar with the details of the explorer’s journeys and travails, spoke at some length about them and about other memorialisations of historical figures, such as the bronze heads of Australia’s Prime Ministers in his native Ballarat, and the grand and high statue of the explorer himself in Victoria Square, Adelaide.

In response Marie Elena Ellis, who with her sister Roseanne, is responsible for the design of the Gathering Garden, asked if there are any statues of “our Aboriginal icons” here. She went on to tell the meeting that her forebears Sid and George Ross had guided Stuart through this country, shown him waterholes, hunted kangaroo for him. Where was the statue of them, she wanted to know. Sid Ross, after whom the hostel on Gap Road is named, was her great-great-grandfather, she said.

Tracy Spencer, a minister with the Uniting Church, said she supported representations of “shared history” but she ìas a whitefellaî did not want to be represented by a man with a gun. She said the issues at stake were highly sensitive and surely there was a better way to represent “us”.

Committee chair and Deputy Mayor Brendan Heenan suggested that such a representation was historically accurate: “People travelled with guns for food.”

Mayor Damien Ryan said he took part with Betty Pearce in her reported comments (in the Centralian Advocate) on the issue of the gun.

Committee member Lisa Stefanoff read from a letter she had received from Eastern Arrernte artist Kathleen Wallace (designer of the mayoral robes), saying that such a representation does not show reconciliation, it “scares” Aboriginal people and is not “what we want to be reminded about”.

Dr Stefanoff, a cultural anthropologist, welcomed Mr Nicholls’ comments about history. It was clear that Stuart’s arrival marked the start of a shared history with “many textures, from sorry and sad to tremendous”. She hoped that she could contribute to finding a way of opening up questions of how to represent that history. She acknowledged an important place for memorialisation, looking forward to helping find the “most beautiful and acceptable way” to represent important historical figures. She said the town could set the standard for representing shared history.

Edan Baxter said there are many ways of interpreting history and that the Stuart story was about the meeting of two cultures as well as the achievements of a remarkable man.

Ms McManus also saw a representation of Stuart’s encounter with Indigenous people as a desirable  alternative to representing “a single man with a gun”.

Eric Sultan said he had arrived at the meeting supporting the erection of the statue but had changed his mind if it was going to be “hurtful to a lot of people”.