'They are afraid for their children' 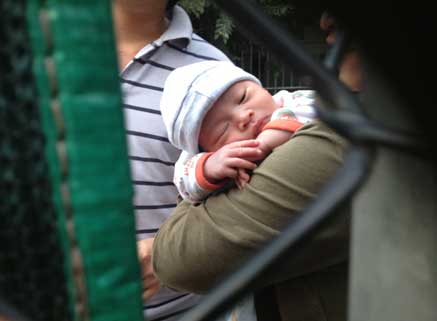 Sir, Mothers in Darwin detention centers are growing increasingly despondent as Immigration Minister Scott Morrison’s cruel suite of policies take effect.  Darwin detention centers are increasingly being used as holding centers for pregnant women who, six weeks after they give birth in Royal Darwin Hospital, are removed back to Christmas Island and the threat of deportation.

Darwin Asylum Seeker Support and Advocacy Network (DASSAN) visitors are meeting asylum seeker mothers fearful of what this government is willing to do to them and their children. They do not know if they and their families may be deported by force in the middle of the night to Nauru or Manus Island. Mothers have heard of the reports of violence on Manus, the risk of malaria on Manus and substandard living conditions on Nauru – they are afraid for their children.

A women attempted suicide at Blaydin Point on 29 December 2013 and she remains in hospital. Parents tell us that the environment in detention is having a marked effect on their children and they fear that their children will not be able to recover from the trauma the Australian Government is inflicting upon them. Many of these women and children have husbands and fathers in the Australian community desperate to have their families live with them.

A number of families in Darwin with small children have been in detention for over a year and, despite falling outside of the cohort of people who can be sent to Nauru and Manus, have been given no indication when they may be released. Some families in other detention centres have spent a year and half in detention.

There are no maternal and child health nurses working inside detention for these women. Pregnant women report a lack of maternity clothing being issued by Serco. Some women report giving birth in the presence of Serco security guards who insist on remaining inside birthing rooms during labour. Women who suffer a miscarriage are simply placed back in detention without any regard for their mental health.

Darwin detention centers saw chronic levels of self-harm and suicide attempts in 2011 and 2012, including children. If children are not released from detention soon more children will be presenting at Darwin hospitals as a result of Minister Morrison’s policies. If there is no prospect of a person being sent to Nauru or Manus the Minister should act now and give, at least mothers and children, a chance of recovery and release them from the horror of detention.