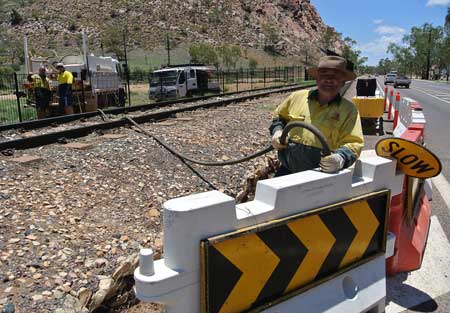 An agreement has been struck with the Black Spot Program for there to be no requirement for the NT Government to pay back the cost of installing the crossing, and that it will fund the additional safety measures for this area, according to Geoff Horni, Director Road Planning, Department of Transport.

He says the current structure is being removed, and the speed limit has been reduced from 70 kmh to 60 kmh from the Tom Brown Roundabout to south of Commonage Road.

The works cost $430,000 and involved shared funding from the Federal Black Spot Program ($300,000) and the NT Minor Works Program ($130,000), Mr Horni says. But feedback from the broader Alice Springs community was that the crossing adversely affected some road users and assessment on its usage has indicated it is not being used appropriately.

Mr Horni says a number of safety measures have and are being implemented at the site. Improved street lighting is being designed for installation, highly conspicuous pedestrian signage has been installed and further road safety education of the local community will be undertaken.

PHOTOS: Work to remove the crossing has started. • Woman walks through the hole in the fence rather than using the crossing.

The Commonwealth Department of Infrastructure and Regional Development will not be paying for the removal of the controversial pedestrian crossing at The Gap.

What’s more, if the Territory Department of Transport removes the crossing, it will have to return the Federal Government the Black Spot funding used to build the crossing in April last year, namely $266,521.

A spokesman for the Federal department says: “All Black Spot funding would need to be returned if the crossing is removed and no replacement safety works are undertaken – the NT Department of Transport has been informed of this requirement.

“If replacement safety works are installed the Department would consider a request from the NT Department for a variation of the approved works which may allow the Black Spot funding to be applied to revised works.

“Changes to the approved works at a Black Spot site are not uncommon in all jurisdictions and any such request by NT Transport would be considered in the normal way.”

Meanwhile the misuse of the crossing has become endemic and is apparently tolerated by the police while posing serious risks to pedestrians.

Many, though not all,  people from the Little Sisters camp, crossing the highway to get to the store and bottle shop on the eastern bank of the Todd, clearly prefer using a gap in the fence some 100 metres south of the official crossing.

Soon after the completion of the crossing a hole was cut in the fence. It was repaired but now the fence panel has been removed again.

The pedestrian warning signs are still in place, encouraging motorists to expect people to cross where they are meant to.

This means people using the gap in the fence, especially in the dark, are at grave risk.

The gap in the fence is directly opposite a floral memorial  indicating the place of a fatal accident.

The railings in the middle of the road have been removed, making the safety island much less effective for pedestrians.