Is NT Government turning its back on CBD project? 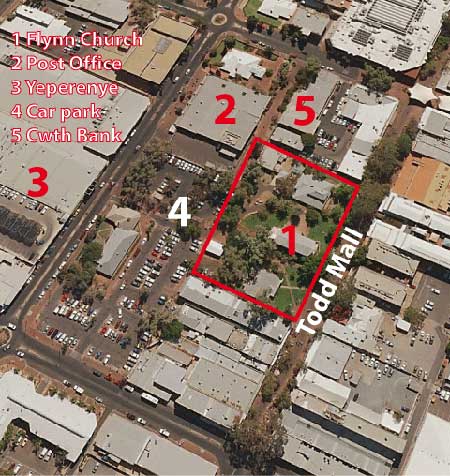 The NT Government appears to be turning its back on a proposed residential development creating about 70 apartments in Todd Mall. Developers say the project also has significant community benefits which would warrant a $2m grant.

Minister for Central Australia Matt Conlan has refused to be interviewed on the matter, but it is understood the request for the money is being declined.

The joint project between the Uniting Church and the Town Council failed to attract Commonwealth funding support last year, but the intention remains to build the apartments and a string of shops near the Flynn Church, and “turn Todd Mall into a community friendly place that welcomes locals and travelers,” according to church spokesman Bruce Walker (pictured below right).

Dr Walker commented in response to questions from the Alice Springs News Online after people close to the negotiations told us that talks are ongoing between the Town Council and the Uniting Church.

Said Dr Walker: “We are very keen to make this project work. The model we have developed in partnership with the Town Council has been used successfully in other parts of the Territory.

“But the business case has to stack up and some of the fundamentals have deteriorated in recent times.”

Sources other than Dr Walker and the church have told us that the council may become an investor and co-owner.

Last year the scheme went into abeyance when Canberra rejected an application for a Regional Development Australia (RDA) grant.

This time ’round, the Town Council and the church may need to step in to fill any financial shortfall in a more significant way.

The main assets against which the scheme could borrow is land – three CBD blocks owned by the church (encompassed by #1 on our Google Earth shot), which currently are earning no or little money for it, and the council’s Hartley Street carpark (#4).

It is understood that the preferred financial model to breath life back into the project is for the church and the council to kick in $1m each in cash. This could be matched dollar-for-dollar by the NT Government, making it $4m.

If that in turn were matched by the RDA, the total of $8m would be a good start towards the $15m needed to limit the overall borrowings, with the remainder of the $60m coming from borrowings and progressive sales.

Sources, speaking on condition of not being named, are saying NT Chief Minister Adam Giles has ruled out a cash contribution from the NT Government. And neither is he prepared to take to Canberra a delegation making a case for RDA support.

The Town Council and the Uniting Church are now looking to draw on other resources.

It is understood the Alice Springs Town Council is the 24th most affluent of the 680 councils in Australia.

It operates on a cash basis – having around $60m in the bank when rate payments come in, diminishing towards the end of the financial year.

What’s more, the council is understood to have $200m in assets, mostly unencumbered. Sources say the NT Government would permit the council to borrow funds.

Sources concede that on the face of it, there could be no worse time for such an investment: The value of commercial real estate in town has dropped significantly. A great number of shops in the mall are empty.

And the recently completed refurbishment of the mall’s northern end seems far from invigorating the CBD and reducing anti-social behaviour, as had been intended.

Yet promoters are saying it’s crunch time for the town to become far more appealing to tourists – or else that industry has no chance of recovery.

And besides, such a community backed project would enhance the confidence in their town of the locals themselves.

Says Dr Walker: “This is more than a development project, it is an important transformational statement in a town that is currently flagging and needs an injection of vision which will lead and attract further investment.

“All our research and reports indicate this will happen. Our task is to convince the community and government of the need for such a project at this very critical time.”

Google Earth Image: The red rectangle shows the land owned by the Uniting Church. To the west of this is the council’s Hartley Street carpark: some of it is earmarked for the proposed residential building, some for a multi-storey carpark, and some of it for a landscaped, open community area that will stretch from Todd Mall to Hartley Street. The former Commonwealth Bank building (# 5 in the photo) has been empty for some time.