The little children are clever 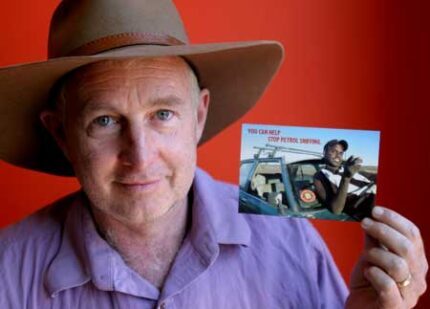 Part One: The choice not to go school

In this series of reflections I plan to explore the proposal that in defining aspects of the Aboriginal “problem”, mainstream Australian brings its own cultural assumptions into the arena. I look at education and work, and attempt to bring a perspective from the other side of the cultural divide; to look critically at the antics of the self-defined “dominant culture” to turn Aboriginal people into whitefellas.

I will look at some underlying assumptions that people bring as cultural baggage to this debate, and show that the questions asked are the wrong ones, and that some much more interesting questions are beneath this cultural conflict, with a perspective that whitefella culture vitally needs at this juncture of history.

Little Aboriginal children in remote communities are choosing not to attend school.  From their point of view, this is the right thing to do. Anyone faced with a choice decides on their action through considering investment vs return (Biddle, 2010, p 2). At the heart of this model is the assumption that when deciding on whether to undertake a certain type of education, potential students are rational (in the economic sense) utility maximisers who, above all, see education as an investment.

From the point of view of mainstream culture, there is no rational reason not to choose school. You need an education to get a job, and the better the education, the better the job. The harder you work, the more resources you can accumulate – the more happiness you can consume. However, there is an alternative point of view which may improve our understanding of this choice. To do this, I will first discuss some of the assumptions that are made about aspects of this situation.

Assumption one: that increased attendance will improve outcomes.

Seems to make sense, but long term research shows otherwise.  There are no improvements in results of groups that attend school 60% of the time versus 90% of the time (Osbourne, 2013).  Forcing kids to attend more will have no result on school outcomes as assessed by The National Assessment Program – Literacy and Numeracy (NAPLAN ). The underlying assumption is that the schools are meeting the educational needs of the children, so more time at school will result in more education. So is it the schools? This leads to:

If this were the case, the results of non-Indigenous kids at those schools would also suffer. However, the school performance of those kids are on a par with urban schools (Osbourne, plus NAPLAN report). So it’s not the schools.

So why should the kids elect to go to school more than they currently do if it makes no difference to outcomes? Convenient though it is to blame these clever little children, it seems the problem is in the education system. Not the dedicated teachers doing a hard job in remote locations, nor in the ability of the curriculum to foster an education. In the education system itself. And I am in good company thinking the problem exists in all western education.  Sir Ken Robinson’s TED Talk “How schools kill creativity” has had over 20 million views. I think the flaws are more evident at the periphery of “dominant culture” due to the lack of momentum in those locations: education has to prove itself in that context, whereas in whitefella world, it is an unquestioned institution.

The education results might be different if non-Indigenous kids were tested on tracking and hunting, with the exam in Pitjatjantjara. But they never will be, in part because NAPLAN is unconsciously a test of whiteness.

Given the above, a policy of forcing those clever kids into more school must be considered irrational. The pressures that are being brought to bear on the families of these clever kids have the potential of causing problems between generations for no reason. It would be experienced thusly by the children. I thought we were trying to make the kids’ lives better. The way to improve outcomes is demonstrably changing the schools.

So why are we so interested in getting these clever kids an education? Is it to foster creativity and critical thinking?  Or train them into the obedience required by our central cultural practice – work. I don’t think I have to explain that preparedness for work dominates the mainstream debate about Indigenous education.

Mainstream kids know from watching their parents and their environment that better education results in better pay. Education = work opportunities. Which leads to:

Seems to make sense in today’s workforce, but not where the kids live. In remote Central Australia there are plenty of jobs Aboriginal people could be doing now. Analysis of Census data shows more than 3000 jobs being done in that area by non-Indigenous people with no certificate qualifications who have not gone beyond year 10 (Guenther, 2013). So in the remote context in which the kids live, there is plenty of work for people with low educational outcomes. This also brings up:

Assumption four: there is no work out there.

Clearly there is, with 3000 paid positions in the southern NT that could be done by Aboriginal people occupied by unskilled non-Aboriginal people. Or are they unskilled? Maybe these workers have cultural skills that allow them not to give old women food when they are hungry unless they pay for it.

The clever children know what would happen if they were working at the store and their beloved grandmother asked them for food. They know she has been feeding the kids for years out of her pension. She probably fed the clever kids last night. The clever kids apply the values of a grateful grandkid first, and check out operator second.

So it’s not lack of work. It’s lack of understanding of the challenge that some types of work pose to the clever kid, who knows where his next stew is coming from, and chooses accordingly. Those clever kids lived experience is that their family provides for them, not selling their labour in the marketplace.

The clever kids hope they can find types of work that do not pose big problems for sympathetic and generous people.  Painting is such an enterprise. It can be a reliable source of resources that can be undertaken at the convenience of the painter, but the market is flooded.  Ranger work, tourism, botany and biology, music – there are options for work that could be fostered over time. But deep down, the kids know that ultimately the family will look after them and they will not starve. That changes the underlying power dynamic of the workplace substantially.

NEXT: Jobs are not the only way to harness resources.

* Blair McFarland has been working in Central Australia since 1986 on substance abuse issues, and was awarded the Prime Minister’s Award for Outstanding Contribution in Drug and Alcohol Endeavours in 2008. These reflections are presented as personal opinion.

Guenther, 2013 “Education is the key, but what door does it open? The values of education in very remote NT young people”, paper presented by Assoc. Prof. John Guenther, ANU, September, 2013, available to download.

Will the Todd Street North side of the Alice Plaza open its doors onto the street following the revitalisation works recently completed there? This was one of the expressed hopes behind the works but it seems that the short answer is no. KIERAN FINNANE reports.

Horror stories about public housing: People from the bush are given a dwelling in town. Within days a horde of relatives descends upon it, the place is trashed, the neighbours are in uproar and the pollies running for cover.

Now Aherlkeme, a training facility south of the Gap, may have the answer. After a rocky start in July 2011 new managers are getting tough on rules. Passing life skills courses there are becoming a condition for getting public housing. ERWIN CHLANDA reports. 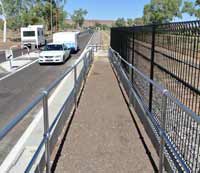