Booze gets millions of likes 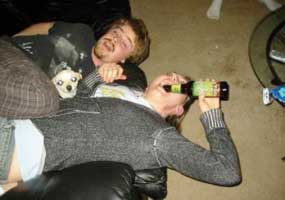 AUSTRALIA –   PARADISE FOR THE ALCOHOL INDUSTRY

So ingeniously aggressive is the alcohol industry, that they are inducing social media users to promote their product. The Conversation (24/12/13) notes booze pages on Facebook have as many as 10m “likes”.

Platforms encourage users to interact with sites via the “like”, “comment” and “share” functions, posting photos of themselves and their friends on nights out. In addition, many bars and clubs hire photographers who post pictures of guests on their social media pages.

“As well as selling users’ data on to third parties, marketers can also use this information to send targeted messages to young people about cheap deals. Social media also offer new opportunities for viral marketing, such as “astroturfing”, where sophisticated software is used to create fake community or opinions on web forums; advergaming (advertising in games) and user-generated content (UGC).

“A recent ruling by the Australian Advertising Standards Bureau stated alcohol brands’ Facebook pages should be treated as marketing communication tools, and all contents should fall under the industry’s self-regulatory code of ethics, including all UGC.”

A NATION OF MUG PUNTERS IN AN ETHICAL BACKWATER

The Australian (3/1/14) reported that Australia’s biggest sporting codes (cricket, AFL and the rugby codes) and commercial broadcasters “this year face a public health campaign to close a loop-hole allowing alcohol advertisements to be screened in children’s viewing hours.

“Greens acting leader Richard Di Natale, a GP and retired league footballer, will move to establish a Senate inquiry into the promotion of alcohol to children in the first half of the year.  Senator Di Natale said last year’s campaign to remove live odds from sporting broadcasts showed the threat of regulation could be enough to force change.

“The Commercial Television Industry Code of Practice prohibits alcohol advertising before 8:30pm, but provides an exemption for live sport, which relies heavily on sponsorship from beer companies.  Any changes to the code are likely to meet resistance from the major sports, alcohol companies and alcohol retailers.”

The next day, The Australian (4/1/13) reported Carlton and United Breweries (CUB) and the Brewers Association of Australia and New Zealand had dismissed calls for an enquiry, saying “there is no evidence beer ads are having a harmful effect on children.”

All of this is reported with an on-going background of alcohol-fuelled violence across the nation.  In looking deeper for cultural explanations as to why this should be happening in Australia, Alcohol Watch notes Gordian Fulde (Australian, 4/1/14), the director of emergency medicine at St Vincent’s Public Hospital, Sydney: “Alcohol inhibits the inhibitors,” he says. “Australians are becoming desensitised to violence.”