Pandora's Promise: go nuke or not? 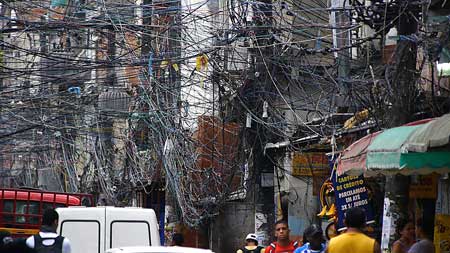 For a small town Alice Springs occupies a prominent place in the nation’s nuclear debate: we’re surrounded by uranium deposits.

The first national nuclear waste dump is likely to be set up not far to the north of here; the former Labor government sent an explorer packing in a bid – unsuccessful and highly unlikely to succeed – to win a minor by-election.

And our massive power consumption, driven by climatic conditions, suggests a low carbon emission source for electricity would be a good idea.

Against this background the provocative film Pandora’s Promise (90 minutes) will be shown here on December 11, together with Climate of Hope (30 minutes).

It’s an initiative by Paul Darvodelsky to stimulate informed debate: he owns the cinema and also runs from Alice Springs a process engineering consulting business, which has clients throughout South East Asia and Australia.

He says he’ll be introducing the movies with thoughts along the following lines:

“Germany, which is oft-touted as a shining light in renewables, imports 60 to 70% of its energy, much from France (80% nuclear) and other countries, the total of which is largely nuclear.

“They also use predominantly oil and brown coal, which are some of the dirtiest fuels.  They only have 1.5% renewables,” says Mr Darvodelsky (pictured).

“On the positive side, the Germans are strongly focussed on reducing consumption and investing heavily in renewables.

“Still, they are committed to running their own nuclear plants until at least 2022 and most likely beyond. 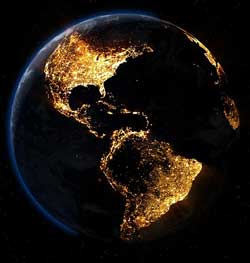 “Various statistics on deaths from nuclear power are all over the place but we see far less information about the impacts of power from fossil fuels, which are significant.

“I’m trying to get to the bottom of whether climate change or nuclear accidents cause more damage.

“It would appear environmental and human impacts are greater from coal fired energy, directly and from climate change” says Mr Darvodelsky.

“Amongst all the hype from the pro and anti-nuclear lobbies it’s very difficult to find reliable information. However few reliable sources seem to suggest we can exceed more than about 25% renewable energy with current technologies.

“We need a major breakthrough to meet our energy needs.”

The evening is licenced, so if at the end you feel you need a drink, the opportunity will be at hand.

IMAGES, top: Cabling in a Brazilian slum. Above: Lights are on across the world.