Alcohol is the new heroin 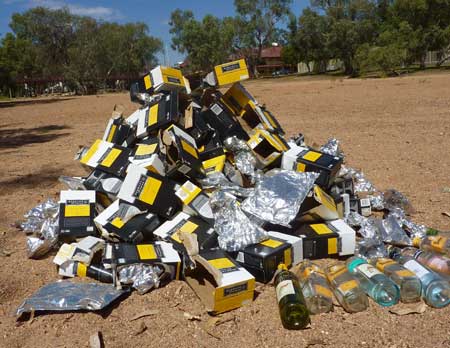 Alcohol and heroin were linked by the NT Opposition in reference to the sale of the former earlier this year, so I can hardly be accused of being the only one making such a fresh metaphor for our times.

Alcohol is so readily available and increasing that it is a social epidemic. Anyone who believes that alcohol is not as addictive as heroin is riding their armchair.  In the weeks since the last Alcohol Watch, there have been some interesting developments.  Let’s take a look.

A restriction on alcohol sales in Broome because of rioting and violence was instigated by police from 5 pm to 9 pm on the night of November 27.

Take-away outlets were only allowed to sell one carton of mid or low strength beer per person and taxi drive-throughs were banned.

The restrictions were lifted at 9 am the following day, meaning liquor stores could resume trading at midday. The ban was prompted by ongoing violence between feuding families.

Broome is normally exempt from the tight liquor restrictions in place in the rest of Kimberley.  Many of Broome’s bottle-shops closed down completely, including one connected to the Roebuck Hotel.

Hotel spokesman Mike Windle said: “When you’ve been in the game as long as I have, it’s just another example of how the majority have got to suffer at the hands of the minority. Simple as that.”

However, Kathy Wilson, a director of the Marnabulanjun Aboriginal Corporation in Broome said that alcohol abuse is causing problems for the whole community: “Sometimes I can see kids young as 9, 10 walking the streets, drunk as 60 cats, stoned out of their eyes and I don’t know where their parents are.”

Newly legislated Alcohol Protection Orders (APO) will ban people in the NT who are charged with committing a serious offence while drunk, from possessing or drinking alcohol or entering licensed premises for three to 12 months.

70% of domestic violence incidents in the Territory are the result of alcohol abuse.  It will be up to police to stop banned people entering licensed venues and buying alcohol, and licensees may be provided with photos and names of those banned so they don’t unknowingly serve them.  The move is supported by the Australian Hotels Association.

“I don’t think this puts the onus on staff,” AHA NT senior vice-president Mick Burns said. “It targets the problem, it doesn’t target 99 out of 100 people that do the right thing and go out and enjoy a drink and don’t do the sort of things we read about on the front page of the paper.”

Critics of the legislation say it will criminalise alcoholism and disadvantage Aboriginal people, and say that it’s more cumbersome than the previous Labor government’s Banned Drinkers Register, which created a centralised system for bottle shops and licensed premises to scan patron IDs and refuse service to those banned.

The NTG considers personal responsibility in alcohol consumption ahead of liberal alcohol supply and protecting an industry which self-regulates.

However, the ABC reported (Michael Coggan, Lateline 29.11.13) that Dr Lee Nixon, “who played a key role in establishing the Northern Territory Government’s new mandatory alcohol rehabilitation program has quit in protest at the way the program has been run, as well as the treatment of Aboriginal drinkers”.

According to the report Dr Nixon says he hopes his decision to speak out will prompt the Government to rethink its reluctance to stem the flow of alcohol in the Territory.

Dr Nixon has been a doctor for three decades, including 20 years as an addictive medicine specialist.  He agreed to help set up the mandatory rehab program to make sure it was done properly, but now he is packing his bags in protest and heading home to New Zealand.

“I fail to see how it can possibly have any long-term effects as long as there is no attention being paid to changing the drivers of drinking,” he said.

Under the NTG’s Alcohol Mandatory Treatment, drinkers taken into police custody three times in two months are locked up for treatment in a 12-week program.

“The grave concern is that here we are, essentially incarcerating people for three months, who have committed no crime,” Dr Nixon said.

“A large number of them had little understanding of the process, and at the end of the time when they were there, were still asking, ‘Why am I here?'”

While the program is in its infancy, several people have escaped treatment and others have been readmitted after failing to stay off alcohol, including one man who Dr Nixon says was hoping to gain custody of his son after getting out.

“He was back within about three weeks, and he said: ‘It’s impossible out there. There’s no work for us. All my friends drink and alcohol is so readily available everywhere,’ and those were his words,” said Dr Nixon.

“And he almost exactly paraphrased what the research says. At the outset it was clear that we were introducing a program with no evidential base for effectiveness.”

The Government has refused media access to see the process in operation until a six-month review is completed but Dr Nixon told the ABC’s Lateline program there is no review in process.

Despite a lack of evidence, the Territory Government is convinced mandatory treatment will work. Territory Chief Minister Adam Giles says the program is delivering real results.

“We accelerated as quick as we could because we knew people that people were dying on our streets because of the effects of alcohol on their lives, on themselves, their families and their communities,” he said.

Along with Dr Nixon, police are urging the Government to do more to stem the supply of alcohol.

The NT Police Association’s Vince Kelly says it is too early to judge the effectiveness of the program and that the issue of alcohol supply should be addressed.

“I defy anyone in government to tell me that mandatory treatment’s had an effect at this point,” he said.
“It’s a little bit too early to judge, but I would say, equally, it was too early to judge the effectiveness of the Banned Drinkers Register.

“One of the ways to deal with that is the issue of supply and neither the Labor Government or the CLP Government has covered itself in glory when it comes to that type of thing because they’re simply too close to the industry.”

Citing discounted alcohol in supermarkets as a factor, the number of pubs in the UK at the end of 2011 was 50,395, down from 60,100 in 2002.  As the take-away alcohol revolution continues in its quest for cultural dominance, an estimated 26 UK pubs close each week.

Meanwhile, it’s reported that the brain is still developing its decision-making capabilities until age 25.  Australia’s legal age for alcohol consumption is 18.  The next time you see one of those little crosses on the side of the road, ask yourself how many of them are related to drink-driving among young people.