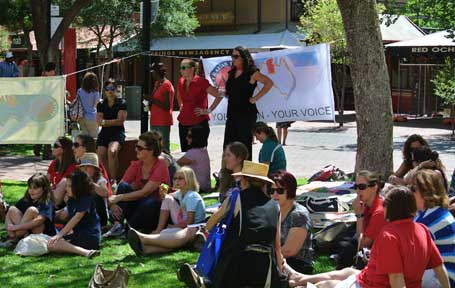 The Fair Work Commission is conducting a hearing today on the situation of 500 permanent teachers across the NT who may not have a job next year due to the NT Government’s cuts to its education budget.

Permanent experienced teachers, some of whom have been teaching in the Territory for many years if not decades and who have found themselves not attached to a particular school, now face an uncertain future.

Alice Springs-based organizer for the Australian Education Union’s NT Branch, Nadine Williams, says the union has been trying to get clarity on this situation for months.

Ms Williams says another Fair Work Commissioner will tomorrow conduct a hearing on the Public Employment Commissioner’s decision to dock a full day’s pay from teachers who took four hours’ strike action last Tuesday (rallying on the Flynn Church lawns in Alice, above)..

Top End teachers will stop work for four hours on Wednesday morning in what AEU-NT union secretary Peter Clisby promises will be the biggest action ever.

Ms Williams says teachers’ resolve and anger are hardening in face of government attacks on their professionalism, of the like issued by Minister for Public Employment John Elferink (reproduced in full below). Mr Elferink criticized the union and its members for putting their own interests before those of students. He was responding particularly to on-going work bans and limitations. Ms Williams says these involve at present not entering attendance data in the schools’ electronic system and limiting, at their discretion, work outside of school hours.

Ms Williams says local teachers are bitterly disappointed in the lack of support for the situation in Alice Springs public schools from local MLAs. She door-knocked all three – Adam Giles, Matt Conlan and Robyn Lambley – after last week’s strike but none was available. There has not been “a peep” from the MLAs before or since, she says, despite direct lobbying from the chairs of local school councils and Council of Government School Organisations reps.

The Teachers Union should be condemned for putting their own interests before those of students by instructing teachers to ignore their duty of care.
Following a disruptive strike last week, the Teachers Union issued instructions to all members stating the roll call program SAMS should be abandoned and a student’s attendance should not be marked from the beginning of next week.
Minister for Public Employment John Elferink said this irresponsible and dangerous move by the Teachers Union will mean that in the event of an accident or emergency, there is no way to accurately identify if a child is present either in the classroom or at school.
“Schools, principals and teachers have a duty of care to all students and knowing which children are at school is a critical element of that care,” Mr Elferink said.
“When parents send their children to school, they expect that the regular, necessary processes will be followed to ensure their child’s safety, yet this is has been disregarded.
“This is yet another example where the Union is putting their own interests before the children’s.
“The Union’s tactics over the Enterprise Bargaining Agreement (EBA) negotiations directly affect children’s safety. Parents expect better care of their children. This crosses the line.
“The Teachers Union claim they are not striking on pay, however they have refusing to sign up to the most recent fair and reasonable EBA offer.
“If this is really not about the pay, then sign the EBA offer and have teachers get back into the classroom to achieve the best educational outcomes for our children.
“Territory teachers are the second best paid in the country and have the lowest student teacher ratios, yet the educational outcomes they produce are the worst in the nation.
“Clearly the current situation is not working.
“I urge the Teachers Union to contribute to the three reviews into education to assist us to make better educational decisions instead of inconveniencing parents and students and abandoning their duty of care.”