By-election campaign takes the pulse of the town 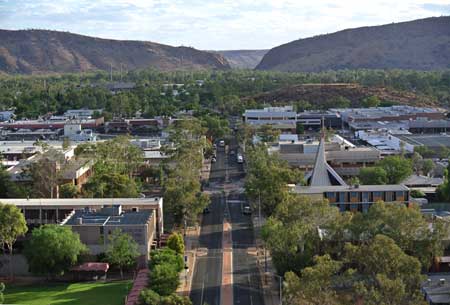 Preference deal jockeying aside, the by-election campaign is a chance to take the pulse of the town mid-term of the current Town Council. On the eve of the vote the Alice Springs News Online asked candidates what they had learned about local concerns and what impression they have taken from the campaign of the mood of the community.

The News has yet to hear from Kylie Bonanni but will update this article when and if we do.

On the preference issue Matty Day says simply that John Bridgefoot has reneged on his deal of two weeks ago. Mr Bridgefoot says he has kept to it, by allocating his second preference to Edan Baxter. He expects that Mr Baxter will drop out in the second round and that his preferences will flow to Mr Day. “That’s not the deal we made,” says Mr Day, reluctant to get any further into “a back and forth” on the issue.

Mr Baxter (below left) meanwhile has made no deal at all and is leaving his ‘how to vote’ open as to preferences. He sees the issue as distracting from the kind of discussion which is of benefit to the community.

He has found people feeling a little election weary, “politically exhausted”. He has been surprised by how many people have not been aware that there would be a by-election following the resignation from council of Geoff Booth. A frequent reaction has concerned the cost to the ratepayer of the by-election (estimated at $90,000).

He has found people don’t want to be too overloaded with ideas and proposals. Some have questioned his focus on the NBN, but he remains convinced that this is an area where council can do much better: “We must and should be part of the big national infrastructure issues and look for good outcomes at the local level.”

How can council do this? He’s looked at what councils are doing in other parts of Australia and discovered a coalition of 135 councils working together to share online resources, projects and programs and to take part in policy discussions. They are positioning their communities to take part in the digital economy, he says.

For council, greater savvy in this area could lead to greater efficiencies in its operations. Using the existing committee process, council should start identifying the opportunities to see what can be achieved. Somebody across the technologies and the debate would be an asset on council, he says.

People just want some “minor tweaking” of issues like “intersections” and more “support for community events”, according to Mr Bridgefoot (below right). Otherwise the mood of the town is feeling “very confident”, he says.

People also want to see more youth programs: “Youth are the future, we need to look after them and provide direction. If we don’t, there’ll be anarchy on the streets.”

He says people want “fair and equal representation”. They see some candidates as “representing one group of people and excluding others”.

Who is being excluded? He says people haven’t been more specific, “you can read into  it what you want”.

He denies that this is a reference to Mr Day’s association with young skateboarders. It could equally be to Colin Furphy’s concern with cyclists, or to Kylie Bonanni’s with “certain people”, he says.

Mr Day (below left) makes mention first of people’s support for kerbside recycling, which he promoted during his campaign. They also want effective and profitable business in town, he says, and want a local government that works with them in areas where council has an effect. 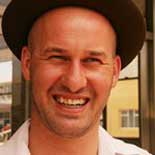 “There’s no doubt that people care about what happens to our young people in town and want council to play its role in ensuring effective care of its young people, in particular things like summer holiday program.

“There are also mixed feelings about transport issues in town.  An integrated transport solution often comes to the surface during conversation. The majority people want to see better cycling and pedestrian opportunities provided and promoted.”

The mood of the town is positive, he has found: “Most of the people I spoke with are optimistic about the future of Alice Springs and it’s clear that community is wanting a councilor who will listen and act on behalf of the community. They are looking for a candidate who will represent the views of a broad cross section and has an inclusive approach to building community.”

Colin Furphy (below right) says people on the whole are “very happy” about Alice Springs – “there are just a few issues that need extra attention”. 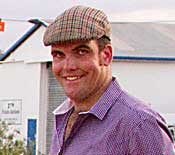 At the top of the list is concern about “crime and night safety”. While these issues are often seen as outside council’s jurisdiction, Mr Furphy says there are some very practical things council can do, such as “providing programs for the summer period to keep people occupied, so they don’t turn to crime”.

Council could also work on better lighting for streets and cycle paths. Mr Furphy mentions Larapinta Drive in particular as needing improved lighting, which would encourage more people to use their bicycles at night.

He says that people want a representative to whom they can speak freely and they want to feel that they are heard: “At the moment people feel they are not being heard,” he says.