Editor injured in hit and run 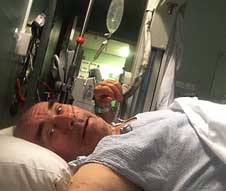 UPDATE, November 23, 2013: Operation successful, new plumbing installed, hardware on the way back to full capacity. Thanks a million for all your good wishes – Erwin. 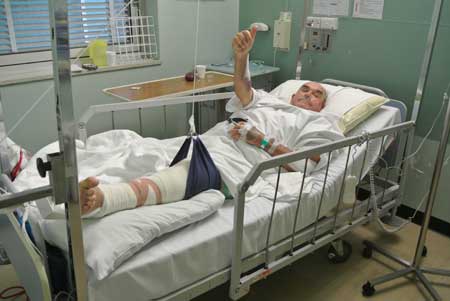 Alice Springs News Online editor Erwin Chlanda was injured in a hit and run accident on Tuesday night. He was evacuated to Royal Adelaide Hospital yesterday where he will be operated on for a broken femur and pelvis.

Mr Chlanda was riding a motor scooter on the south Stuart Highway, heading towards the airport, at around 8.15 pm when a driver entering the highway from the John Blakeman bridge failed to give away. The scooter t-boned the car and Mr Chlanda was thrown over the handlebars and the bonnet of the car. The next thing he remembers is being on the ground being looked after by paramedics from St John Ambulance.

The excellent care and comfort he received from them, the staff at Alice Springs Hospital Emergency Department and the Royal Flying Doctor Service is deeply appreciated.

The driver of the car left the scene. The News understands that the police are investigating.

Mr Chlanda’s newshound instincts and typing fingers are uninjured. He looks forward to rejoining the fray soon. He has been greatly buoyed by well wishes received from readers who’ve heard about the accident on the grapevine. To them and to the bystanders who saw the accident and called police and ambulance, many thanks.