Home Issue 30 From Somebody Everybody, with artistry and love
Issue 30Issue 31Volume 20

From Somebody Everybody, with artistry and love 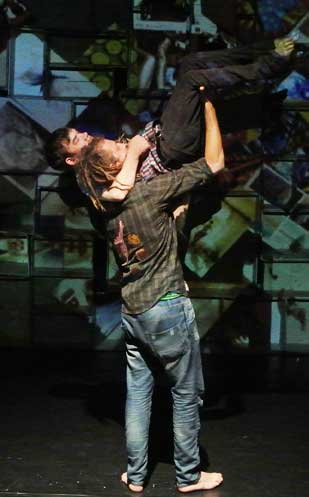 Members of StArts with D are people with disabilities and, as the show reveals, unsuspected depths of ability. The achievement of the production, developed in four stages over two years, was to shape the troupe’s creative and self-expressive abilities into a series of vignettes around key images of loss and discovery, and then to have them partner with artistic collaborators – on and off stage – who could support their performance without taking over.

Thus the set, designed by director Kat Worth, was simplicity itself while also operating in a sophisticated way. Constructed from innumerable cardboard boxes forming a high wall it served as metaphor – for our tendency to put people ‘in boxes’ –  while also creating the theatrical space. Sometimes it was used as a surface for projection or, most effectively, multiple projections; at other times the boxes, some with doors, became elements of a domestic setting, places where you might lose or find something.

At either side the wall of boxes broke down into wings at seat height, like enfolding arms. Performers and stage hands all sat together here when they weren’t central to the action. This contributed to the ease of entries and exits as well as to an atmosphere of intimacy.

On stage, collaborators James Loveday, Melissa Kerl, Miriam Nicholls and Stephanie Harrison worked alongside the ensemble with a mixture of respectful tenderness and sheer enjoyment which the well-conceived structure of the show fostered. The mood, colour and imagery changed from vignette to vignette, giving the different performers their moment to shine. 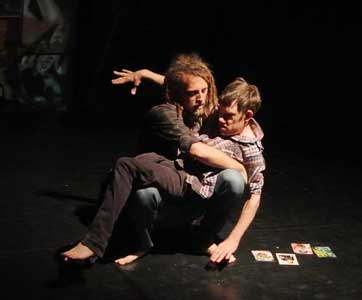 The images were straightforward yet poignant, things like ‘the shoe being on the other foot’. It was the physical and emotional range of the performance that lifted the content to a whole other level – stretching, I imagine, the performers’ experience of their own bodies; stretching too the preconceptions, however unconscious, of many in the audience. Here were acrobatics, comic routines, playfully flirtatious sketches; here was some light satire; here was rock ‘n’ roll!

But above all here was an enabling strength of relationship between collaborators and the ensemble, given artistic form. This is what was so moving. Loveday lifting Daniel Benson high in the air and bringing him down again (pictured, left and right), the trust and tenderness between the two; the acrobatics Loveday supported Trew to achieve; the affectionate ease between Kerl and Nicholls and their various partners, no doubt built over time, the confidence that it has unleashed allowing the performers to present disciplined song and dance routines and dramatic sequences – all this was very memorable.

And it gave real depth to the production title, Somebody Everybody. Between audience and performers passed a wonderful experience of shared humanity.

The show was presented by Incite Arts in collaboration with Acacia Hill School and Life Without Barriers. Formerly Incite Youth Arts, this year the organization has amalgamated with Arts Access Central Australia. Rebadged as Incite Arts they will continue to deliver arts programs to youth, people with disabilities, Aboriginal and other diverse communities. 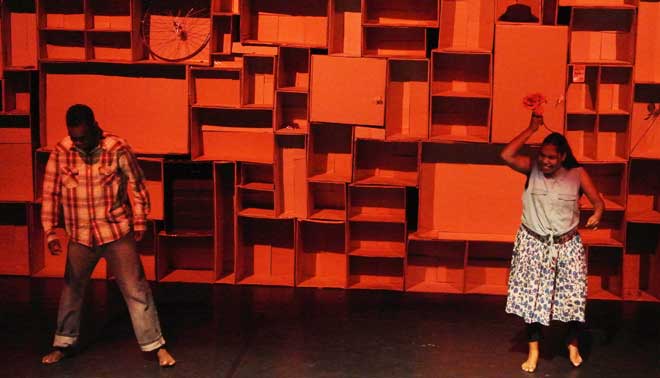