Home Issue 29 Skate trial in the Mall: council turns its back on the kids
Issue 29Issue 30Volume 20

Skate trial in the Mall: council turns its back on the kids 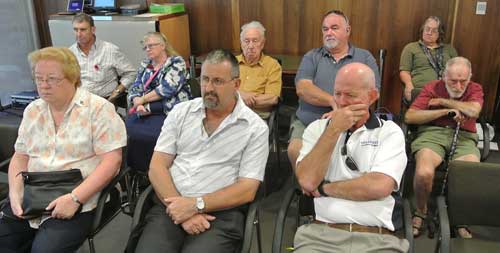 In the latest backflip on skateboarding, the trial approved two weeks ago to permit the sport for three months has been scuttled on the vote of all members except Councillor Chansey Paech, who initiated the trial and stuck by his guns. Cr Brendan Heenan was absent from the meeting but had opposed the trial at the earlier vote.

It is now proposed to build an amphitheater which can also be used for skating, in Snow Kenna Park, where the Henley on Todd is held.

But youth advocate and by-election candidate Matty Day, speaking outside the meeting, said the skaters will be pushed out of the CBD to a stretch of the river which is notorious for illegal drinking, antisocial behaviour and crime: “Would you send your child there,” he asked.

In discussion it was stated that the amphitheater could be funded from current council resources and be built within six months. Mayor Damien Ryan asked Director for Technical Services Greg Buxton if he would fancy a challenge of doing it in four months but Mr Buxton didn’t like his chances.

Mr Day said skate parks are designed by specialists who are very busy and the time frame is completely unrealistic.

The council reversed its decision after former alderman Murray Stewart, supported by a deputation of about 15, not including any young people, made an emotional appeal to drop the trial.

The decision also followed advice from council lawyer Chris Turner that the council’s insurer may not provide cover for skateboarding related accidents in the CBD if the activity were condoned.

In written advice Mr Turner explained that the by-law prohibiting skateboarding in the CBD suggests that the council had identified skateboarding as “a mischief for which it considered a sanction desirable and that mischief includes a foreseeable risk of personal injury and property damage arising from a mix of pedestrian and skateboarding traffic”.

He said by enabling the trial through “positively directing” rangers not to enforce the by-law “the council may well be held to be liable” if something went wrong.

The meeting discussed the clear solution to the problem – changing the by-law. Mr Turner pointed to sections of the Local Government Act which require 21 days notice to the public and a 75% of the vote.

Councillor Jade Kudrenko, an earlier supporter of the trial, said changing bylaws could not be done “under six months”.

And the meeting readily embraced these facts as reasons for not going ahead with the trial: as director of corporate and community services Craig Catchlove explained, the vote to change the by-law would fail if more than two councillors voted against. The trial had just squeaked through the requirement for 50% of the vote.

To have skaters in the Mall – clearly part of the intention of the $5m redevelopment of its northern end – would require a big shift in the councillors’ attitudes, and that just wasn’t going to happen.

In fact, whether or not skating should be permitted became the subject of nimble verbal gymnastics by Mr Buxton. The exchange went along these lines:

James Spears asked from the gallery why was skating furniture was built in the mall when it cannot be skated.

Buxton: The furniture was not specifically designed for a skatepark but designed to be robust enough for skating.

Spears: Why were ramps included?

Buxton: They fitted into the design of the Mall.

Cr Paech (attending from interstate via phone link): The benches were specifically made for skating.

Buxton disagreesd: Lyndon (Frearson, from CAT Projects which supervised the Mall upgrade) made it clear that the benches were designed to withstand skateboards. They were “skateboardable”. But that doesn’t mean they were for a skatepark.

Peter Solly (from the gallery): As a person interested in tourism he had been informed that skateboarding was going to be part of the Mall facelift. No-one had even told him that would not be so.

Buxton: How far back do you go? Skating may have been included in earlier plans but later ones confined it to the Snow Kenna Park.

Mr Stewart, in his address to the meeting, said during his time on council he did “not once” believe the seating would be used for skating: “It was not part of the agenda.”

He said the trial decision has been rushed through council, by-passing the council committee and advisory committee processes which are usually invoked for difficult decisions. He reiterated concerns he had earlier stated publicly.

He referred to the “Melbourne solution” where skaters have “wonderful free access”. Mr Stewart said this is “in part true – but under very strict guidelines. “They have a skate safe policy and ambassadors.” Mr Stewart did not explain why such measures could not be implemented in Alice Springs.

Dymocks Bookshop owner Bev Ellis, on behalf of the anti-skateboarders deputation, asked: “Who has right of way to on the seats?” Skaters or people wanting to sit.

Ms Ellis conceded her shop’s problems aren’t as bad as they could be because she blocks access to her shop from the Mall.

But the risks, she says, may be greater when she closes down her business in January. The new lessee of the space may well decide to open the doors to the Mall. The skateboard benches are directly outside the shop.

Cr Paech asked whether insurance companies other than TIO had been asked to provide cover. He was told by Mr Catchlove the council had “not gone further” than its current supplier.

Cr Paech said skaters did not want to be “located in back streets, they want to work together with community. If Melbourne can do it, why can’t we?”

Cr Paech attempted to cast a vote in favour of a Snow Kenna Park facility but against scuttling the trial. However, CEO Rex Mooney said this is a “composite motion” and Cr Paech’s vote would be recorded is being in the negative, making this a decision that was not unanimous.

Councillor Liz Martin said it’s important to “engage with the skateboarding fraternity” but she has had phone calls form people concerned about Mall patrons with disabilities or small children.

Councillor Steve Brown said he favours the “alternative”. Further skateboarding facilities could be developed nearby on the paths along the river.

Councillor Eli Melky said he supported Cr Paech’s support for the Snow Kenna Park resolution “all the way” and he regarded the Mall primarily as a place for business.

The meeting also dealt with the issue of refusal to show ID to council staff, drawing hefty fines of $567, which Cr Kudrenko says have targeted skaters.

Cr Brown questioned the need to give power to landfill employees to demand IDs from members of the public, suggesting after the Mall skating “furore” this may raise tempers.

But Mr Mooney claimed the measure is necessary so staff can ascertain the identity of dump users to whom they are giving infringement or banning notices or cautions.

According to the new by-laws, transgressions include not providing name, address and date of birth; removing of waste material of any kind; using abusive language against an employee.

They also prohibit bringing an animal to the facility. Councillor Dave Douglas asked would his tiny pooch on the passenger seat be OK?

The answer was no, but maybe the staff anointed – Mr Catchlove’s term – with these powers may use discretion.

Would town pool staff have powers to demand ID, asked Cr Kudrenko? Mr Mooney said he would have to check.

PHOTO: Part of the public gallery at last night’s meeting: Most are members of the anti-skateboardig deputation. In the back row, left, is council candidate John Bridgefoot. He says he is in favour of a trial but believes that the amphitheater solution is better, and “would make it safer for both the skaters and the people in the northern end of the mall”.


RELATED STORY: From the heart of a skateboarding enthusiast.