Council candidate has a focus on young people 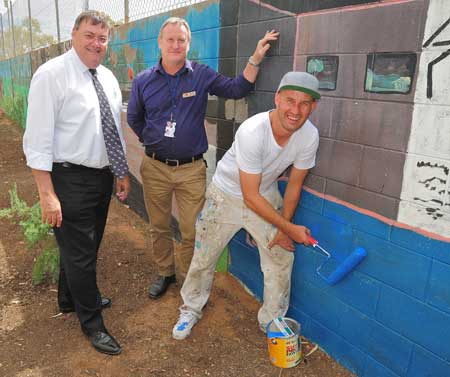 Matty Day, who has a background in education, arts, sport and the youth sector, is contesting the town council vacancy created by the resignation of Geoff Booth.

Mr Day played a prominent role in the campaign by young people to have a skateboarding trial in the Mall.

He was involved in establishing and managing the Alice Springs Youth Hub and has worked with the successful Clontarf program in schools.

He says he is also a driving force behind public art installations such as the works in Parsons St and Brown St. He was involved in the Todd Mall Revitalisation Project and is a member of the town council Public Art Advisory Committee. He has also been involved in local events such as the Alice Desert Festival.

The father of four  is also a keen sportsman, playing AFL in the town league and football (soccer) as well as golf and skateboarding.

“Alice Springs hosts some fantastic events that are supported by Council and I am keen to see this continue and grow,” Mr Day says in a statement.

“A vibrant, active and diverse community also attracts, promotes and supports local business. Encouraging more events in the CBD and other community spaces could to inject more life into these areas and become economic drivers.

“I’m interested in hearing ideas from Alice Springs residents and residents about what they would like to see their council take on in the future.”

UPDATE 1.50pm
The candidates for the election on November 23, in the order in which they will appear on the ballot paper, are BONANNI, Kylie; DAY, Matty; FURPHY, Colin; BRIDGEFOOT, John and BAXTER, Edan Ross.