Council and skaters: War and peace 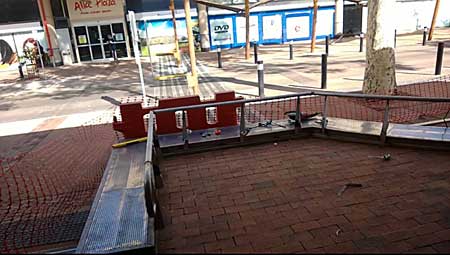 UPDATE Friday 6:50pm: Council CEO Rex Mooney comments: ”The area in front of the Westpac Bank is private property and council has responded to representations made from the owner over a number of months resulting in the modification to the seating which, as indicated, is on private property.”

The Town Council has had railings welded on the benches designed for skating in the recently refurbished northern end of the Todd Mall.

Skater spokesman Matty Day says this is a “declaration of war on young people” as negotiations were under way to find a compromise about skating in the mall.

A shared use at certain times was under consideration, and it is understood Councillor Chansey Paech is going to raise the issue at Monday’s council meeting.

The benches were expressly designed to withstand skating on, but this has been made impossible or difficult by the railings.

The Alice Springs News Online is asking the town council for a comment.