The head of the Mbantua Festival says he is “disappointed and disgusted” that three Central Australian ministers in the NT Government did not turn up to the five day event, widely expected to become a major fixture for locals and a knock-out attraction for tourists.

The only local Parliamentarians attending were Namatjira MLA Alison Anderson, who has recently been dumped from the Cabinet, and Minister Bess Price, who had earlier promised some funding, says Neville Perkins (pictured).

He is the chairman of Arrulka Aboriginal business corporation, which “auspiced, sponsored and managed the festival on behalf of Arunta people”.

Both live in Alice Springs – Mr Giles within earshot of the Telegraph Station where the festival was held.

When asked for comment, only Ms Lambley replied. She said: “We are always faced with many choices of how we spend our time, whether it is on the weekend or during the week.

“Whether we make the right choices of where we go and what we do will be ultimately judged by our constituents. And thankfully we all have different interests which means we spread broadly across the community representing Government.

“I knew that Alison Anderson was attending part of the festivities. I was not aware of the invitation until late last week. I don’t think it is fair to judge me on my lack of attendance. I was only invited at the last minute.” 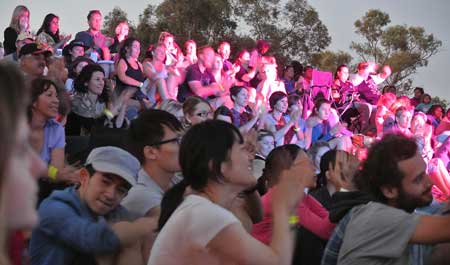 But Mr Perkins said the festival had first been discussed with Mr Giles when he was still in Opposition. “I personally handed to Ms Lambley a flyer in Parliament House before the middle of the year,” he says, “and there has been a lot of publicity in the local media.”

None of the three ministers would disclose to the Alice Springs News Online what their engagements on Friday, Saturday and Sunday were (the Assembly was sitting on Wednesday and Thursday).

Mr Perkins says financial and in-kind support from the community was meager.

Former Chief Minister Paul Henderson had given a “verbal undertaking” of $150,000, and Mr Perkins says the new government should take that over.

There has been no news on that from the Country Liberal government, but he is now hoping for $250,000 – the amount Mr Perkins says by which the event is currently “in the red”.

“We are still waiting to hear from the Chief Minister. It would be a small investment from the government which is battling to resurrect a failing tourism industry,” says Mr Perkins.

“They are funding, to the tune of more than $200,000, concerts of the Darwin Symphony Orchestra in Alice Springs and Ayers Rock Resort.”

The Aboriginal TV station Imparja, which Mr Perkins says did not cover the event, had committed $100,000 from its alcohol advertising revenue.

CEO Alistair Feehan, currently embroiled in the escort agency scandal, had tried to block that payment but Mr Perkins is negotiating with the board direct.

The locally owned Central Car Rentals and Accor Hotels, which owns the former Oasis Hotel, gave some sponsorship in kind.

The major contribution, $841,000, came from the Aboriginal Benefits Account which gets its funding from royalties generated by mining on Aboriginal land. Opera Australia helped out with Bungalow Song.

Mr Perkins says the crowd loved most of the events, in the alcohol-free venue (see our reports), from the Mauboy and Missy Higgins concerts, supported by a string of local performers, to corroborree dancing, spear throwing, youth activities and displays of desert art.

On the “learning curve” side of the balance sheet was the failure of the police to turn up on Saturday, and on Friday night for Bush Mechanics. Arriving spectators were exposed to youths throwing stones from Charles Creek, and some climbed the fence. Two mounted police were there for 45 minutes on Saturday.

However, there were no major incidents at any time and the problem was rectified on Sunday when a good police contingent was present.

Mr Perkins says the Aboriginal Areas Protection Authority (AAPA) asked for $10,000 for a sacred site certificate. He did not pay that and asked the NT Government to waive that fee.

He said some female AAPA Aboriginal custodians also tried to prohibit men’s dancing but Mr Perkins says that demand was ludicrous, and he ignored it: “Arunta men have been dancing at that site for thousands of years.”

In the end, AAPA issued a certificate for the festival to go ahead, with a strict condition that the organisers protect the sacred sites in the area.

“We did that, but many non-indigenous events on the same site had not been required to protect these sites. I will be calling for a review of the AAPA,” Mr Perkins says. His large and prominent family has a long-time relationship with the Telegraph Station.

[We are asking Mr Feehan and the police for comment.]

PHOTO: Part of the crowd during the Catherine Satour concert.

UPDATE 5:30pm:
Bess Price emailed: We went to the “Bungalow Song” on Friday night. Two of our grandsons performed in it. And the concert on Saturday afternoon. Our daughter and her band performed in that.

UPDATE 2am Thursday:
Adam Giles emailed: I didn’t receive the VIP invite in my office until Friday afternoon I am told. I was in Darwin on the weekend and didn’t make it back home so couldn’t attend. Hope you enjoyed it.