No need to beef up by-laws: public behaviour better

The Alice Springs Town Council look set to knock on the head a move to double the penalties for some public places by-law breaches, initiated by Councillor Geoff Booth a year ago.

At last night’s committee meeting only Cr Eli Melky backed Cr Booth on increasing the penalties and even he wanted to see some by-laws taken out of consideration – 26(2) Camping without a permit and 36 (3) Making fire without a permit. Cr Booth accepted the exclusion of 26 (2) but still did not win support. 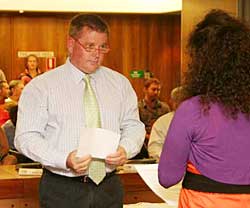 Cr Booth (left, at his induction) said his aim was not to increase revenue through fine collection but to “change habits”. Both he and Cr Melky argued that the town continues to “endure” (Cr Melky) unwanted behaviour, but Mayor Damien Ryan, Crs Jade Kudrenko and Liz Martin, and Director of Corporate and Community Services Craig Catchlove were all of the view that there has been a marked improvement.

The caution notices issued showed a different picture: the numbers are small anyway, but markedly fewer have been issued this year, including one in August compared to 27 in the same month last year.

Out of public places into town camps

Mr Catchlove said anti-social behaviour is at the lowest level he has seen since he has been in the job. He put this down to the increased resourcing and activity of council rangers, out in public places on a daily basis, seven days a week, three shifts a day. He said “the behaviour” seems to have shifted to the town camps; he was not going to comment about that, but from “our perspective” the rangers have been doing an “amazingly good job”.

His report said the daily interactions of rangers and other services with illegal campers lead to most of them moving to the Apmere Mwere Accommodation Park (on Len Kittle Drive south of The Gap) and into the town camps.

Cr Melky thought increases would send a message about “how strongly” the community feels about unacceptable behaviour. He said it is a difficult issue to talk about because it can easily be seen as racist, as most of the people in breach are Indigenous.
Mayor Ryan said council showed it was serious about anti-social behaviour when it put the by-laws in place but he “firmly believes” that they are sufficient in their present form to deal with the current situation. He wanted to get the issue “off the books”.

Cr Brown expressed his support for the by-laws but not for increased penalties. If anything, lower fines could be paid out of people’s pockets while fines of $1000 ($1410 was proposed for the ID by-law breaches) would be “unattainable”.

Cr Kudrenko, observing that “things seem better to me”, said she never has and never will support an increase, commenting on the disparity between the nature of the offences and the penalties proposed and referring to Mr Catchlove’s report on the issue, which suggested that the penalties are “already high” and “probably among the highest in Australia”.

Cr Booth challenged her on the apparent contradiction between this stance and her support for increased penalties for supermarkets on trolley by-law breaches.

Cr Kudrenko said there was a big difference between dealing with big corporations like Coles and Woolworths and “some of the most marginalised people” in the community for whom an increase in fines in any case would not make a difference because of their inability to pay.

Deputy-Mayor Liz Martin said that improved behaviour generally is about education, engagement and creating changes over the long-term. She has observed “the biggest change” over the last two years around her living- and workplace, The Road Transport Hall of Fame, south of The Gap.