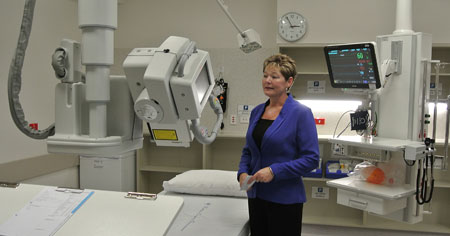 A spokesman for the health department has provided the following comment: “We have a town with relatively few stroke patients and those strokes are more likely to be haemorrhagic where this treatment does not work and makes the stroke worse.

“The treatment of patients who present with a stroke to Alice Springs Hospital is tailored to the clinical need of the patient and additional advice sought from specialist staff interstate if required.”
By ERWIN CHLANDA

To bust or not to bust, that is the question – and it’s one of life and death.

The issue was raised by the ABC’s Health Report, saying some hospitals around Australia have protocols of fast response to symptoms of strokes and the immediate use of clot-busting medication, and some don’t.

“The natural response for anyone with the symptoms of a stroke should be dialing 000 and getting to hospital as soon as possible.

“From a health care system’s point of view, every health jurisdiction should have some sort of protocol for receiving these stroke patients quickly and more importantly, working them up for a clot busting agent, tissue plasminogen activator or tPA,” says Dr Lee.

“On average, for every eight patients you give a clot busting agent to, one will walk out of the hospital completely independently.

“If you can get in even more quickly, say within an hour of the stroke happening, and the clot busting agent is given – say – within 90 minutes, then one patient out of every four walks out of the hospital.

“The other patients have varying degrees of deficits, but in general, they do better over all.”

Dr Winton Barnes, Director Medical and Clinical Services, Alice Springs Hospital and Central Australia Hospital Network, said when contacted by the News: “As a town with a relatively young population, we do not see many stroke patients.

“Diagnostic testing is carried out to determine the nature of a stroke event which will determine the type of medication administered.

“Alice Springs Hospital does not use clot busting medication, other than Aspirin, as a treatment for patients suffering stroke.”