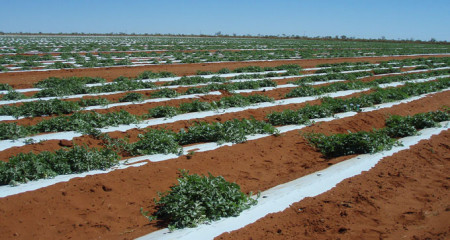 The spiel about the purchase of 2000 hectares 150 kms north of Alice Springs by a consortium to be known as Territory Table Grape is as old as it is trite.

The venture is a “horticultural opportunity for Indigenous Australians in Central Australia”, intones Indigenous Business Australia (IBA) in a media release which announces further that the project will “create wealth for all concerned and provide jobs and opportunities for the local Aboriginal community”.

The upbeat language dried up when the Alice Springs News Online began to examine whether this is just another source of income for no effort.

We asked the IBA: “Is there a condition attached to IBA funding that it would be withdrawn if a target of sustained Aboriginal employment is not met? If not it seems to me that the project is yet another provider of sit-down money.”

We qualified our question with some background: “In a plethora of pastoral, horticultural, mining and tourism industries there are ‘jobs and opportunities’ yet these are not taken up by local Aboriginal people.

“Very few – if any – are working on the watermelon plantation at Ali Curung and the Rocky Hill vineyard, as I understand it.

“Grape growing at TiTree has failed because of shortage of local labour. Backpackers and labourers from interstate had to be employed while there is massive unemployment in nearby communities.”

Replied IBA: “As per the media release, IBA is pleased to be a part of the purchase of the property through the support of Centrefarm through IBA’s Business Development and Assistance program. [We understand this means the financial contribution is a loan.]

“As a result of this commercial relationship IBA is not in a position to provide further comment in relation to the Territory Table Grape consortium and its operations.
“Any enquiries relating to the consortium should be directed to Centrefarm.”

Vin Lange, of Centrefarm, which is an arm of the Central Land Council, told us this: “Other than the press release we are not able to comment either as it is all commercial-in-confidence. Sorry can’t be more helpful.”

So we turned to consortium partner Southern Cross Farms.
Its director, Peter O’Donnell, was equally unhelpful: “Indigenous Business Australia have provided a press release. As you can understand it is a commercial in confidence arrangement so am not able to make any comments.”

IBA is an interesting organisation. On its website it describes itself as “a significant contributor to the goals of the Australian Government’s Indigenous Economic Development Strategy, aimed at closing the gap between the living standards of Indigenous and other Australians”.

Its expenses in 2011/12 totaled $140m. The biggest item was “supplier expenses” of $55m which was – we understand – for people such as lawyers, accountants and consultants. Grants amounted to little more than $8m. The second highest category is “employee benefits” which absorb $43m.

More interesting still is the financial position of the other consortium partner, the Kurra Aboriginal Corporation, raising the question why there has been a need to inject any taxpayer’s money into the grapes project.

In that fiscal year mining royalty income was $6.5m of which $3.7m went to “traditional owner distribution”. A further $688,402 was earned from dividends.

So what – other than euphemisms – does the media release say to the public?

“The consortium plans to farm the property efficiently and profitably while engaging with the local Traditional Owners who have indicated that they are very keen to participate in the day-to-day farming operations.

“Farming operations will commence in July with plans to grow a range of produce including grapes, melons, citrus and seasonal vegetables.

“Initially 150 hectares will be farmed increasing to 250 hectares within the first five years of operation.”
Not a peep about jobs being taken up by idle labour as a firm target, rather than an “opportunity”.

Photo: The Ali Curung watermelon plantation where backpackers and other imported labour, reportedly, do much of the heavy lifting.