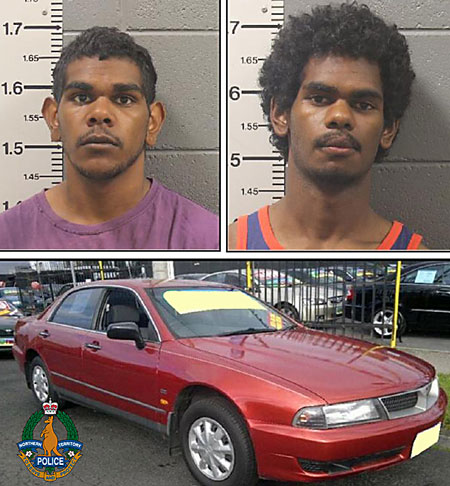 He has been remanded in custody to appear in Alice Springs Youth Justice Court on July 10.

Meanwhile detectives from Strike Force Vega are investigating a series of linked property offences in Alice Springs over the long weekend, resulting in the arrest of five males.

“Three males, one aged 16 and two aged 17, were also charged in relation to the same unlawful entry at the warehouse in Braitling on Saturday night.

“In all of these breaks, the offenders have allegedly used vehicles to ‘ram raid’ each premises to gain entry.”

“Police have gathered forensic evidence and CCTV footage from the scenes, and are actively seeking the arrest of a further two persons in relation to the sports store break-ins and the aggravated assault of a security guard at the show grounds overnight,” Supt Warren said.

“Police are actively seeking the whereabouts of Bruce Impu and Richard Palmer and are calling on the public to assist. These two males are arrest targets allegedly involved in this violent offending.

“The vehicle of interest police believed was used in the sports store ‘ram raids’ is described as a maroon / orange coloured Mitsubishi Magna sedan with white ‘GT’ style striping along the center of the bonnet extending to the rear of the vehicle. The vehicle registration number is CA 82 EU.

“We believe that the offenders in this crime series are all linked, and we are committed to tracking down the outstanding offenders.

“This pattern of offending is the highest priority for the Southern Investigation Division at this time and investigators are currently following a number of lines of enquiry relating to these incidents,” Supt Warren said.

“If you see these offenders or the vehicle of interest, please do not to approach these males, but contact police immediately on 131 444.”

Police photos: Arrest targets Bruce Impu and Richard Palmer. A similar vehicle to the one used in one ram raid, minus the GT Stripe.