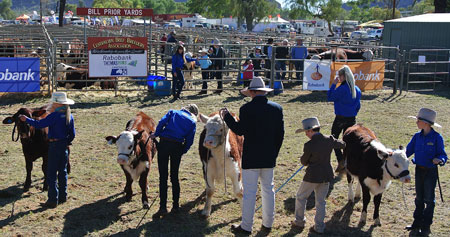 “You get your ups and downs,” says veteran cattleman Dick Cadzow (pictured below), from Mount Riddock Station, north-east of Alice Springs.

What is up at the annual Alice Springs Show is the number of cattle which breeders from the region had brought into town, showing they are undaunted by the industry’s current woes.

Definitely down is the number of interstate exhibitors – and the results of yesterday’s sale: The number of head was down from 3500 to just over 2000 and the average prices were around $1.40 per kilo for steers and around $1 for heifers.

Mr Cadzow and son Steve, who has now taken over the station, were doing fine, achieving the highest price of $1.84 – keeping up their cattle’s usual outstanding performance at the sale.

He says the instability of live exports, following the animal cruelty scandal in Indonesia, had redirected the flow of Top End cattle, now competing in The Centre’s traditional South Australian market for slaughter or fattening-up stock.

And a very dry season in SA had reduced demand, says Mr Cadzow: winter rains had come but at a time too cold for rapid fodder growth.

But none of this has affected the keen competition in the cattle ring, including youngsters vying for prizes such as Junior Handler Trophy, 12 yrs and under – and giving their Akubra hats a proud showing (photo above right). 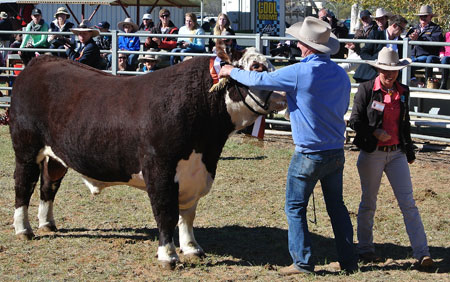 The ribbon for Champion Hereford and Champion Bull of the Show went – for the second year in a row – to South Australian breeder Tom Honner (at left). He’ll be trying to sell this beauty tomorrow: Last year’s winner fetched $7500.

Facebook
Twitter
Pinterest
WhatsApp
Previous articleYarns & fierce contest under a brilliant winter sky
Next articleSocial woes: it's all about having a job, says ALP's Nova Peris