Massive mobile phone demand has Telstra on the hop 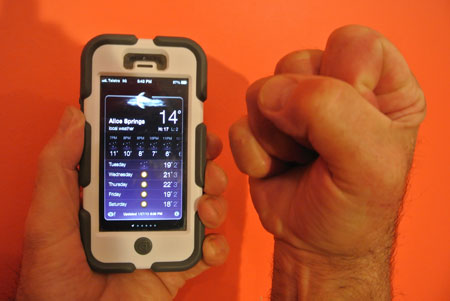 If at times you feel like thumping your mobile phone, you only have yourself to blame: you – the Alice Springs public – have increased demand tenfold since 2002, and that’s a big ask for any supplier.

The town now has six base stations. Two more, at Undoolya and Larapinta, will come on stream later this year. More are on the drawing board: two for the eastern rural area and one south-west of The Gap.

New real estate needed is not easy to get: the Town Council, for one, is currently trying to get Minister Peter Chandler (Lands, Planning and Environment) on side in its objections to towers being built within the municipality.

Just 10 years ago a mobile was used mostly for talking, says Telstra’s Perth-based Ian Pollock, in charge of keeping the hardware up to the breathtaking growth of demand.

Today dad cooking dinner is likely to be online for a recipe. Kids are on Facebook or playing web based games with a mate “down south” while mother is Skyping with rellies overseas.

And all these gadgets may be going online via the personal hotspot from a mobile phone, or the avalanche of 4G wireless devices that has flooded onto the market.

At the same time, thousands of mobiles would be updating weather information. The GPS function of your mobile may be guiding you to an address on the other end of town.

To be able to gauge and predict demand by the number of gadgets around would be fairly easy. But there are dozens of other factors: whether it’s hot or cold, whether you’re likely to be indoors.

To get adequate signal the phone must drag it through the walls and that puts a greater strain on the base station.

A corrugated iron  roof is another obstacle, but this can be remedied with a TV-sytle antenna.

Are your windows tinted? More drain still. A tree’s been chopped down? A clearer path for the signal.

A classic bottleneck was the Finke race, slowing online speed to a crawl: many of the 12,000 spectators and crew kept up with the progress of the race on their mobiles or their iPads, producing a double whammy: firstly they were a long way from the base stations (the airport’s omni-directional facility being the closest). And secondly, there were thousands of people all trying to “get on” at the same time.

Mr Pollock says the new stations will provide a benefit not only to the “cells” around them, but also to the existing six cells because drain on them from the new areas will be reduced.

But even that’s not something you can count on because some phones, in a belts-and-braces bid, will suck signal from two cells.

Telstra has teamed up with boffins of the University of Adelaide to get a handle on all this, working on a form of “chaos theory” in their search for patterns that may allow to predict demand.

To pick the tallest hill and blast the signal out all round is yesterday’s method.

Today hundreds of antennae with varying angles of coverage are constantly re-positioned so they beam where the signal is need most.

Telstra doesn’t always get it right but Mr Pollock is sure of one thing: the doubling of demand every year is likely to continue as landlines go out of style.