Salt mine south of Alice Springs a step closer 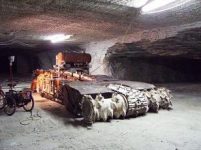 A proposed underground salt mine near Titjikala, 120 kilometers south of Alice Springs, is a step closer to becoming reality.

The NT government’s Environmental Protection Authority (EPA) today will advertise the draft guidelines for the Environmental Impact Statement (EIS) about the Chandler mine.

“This is a chance for the public to provide feedback to the government on the range of studies proposed before we start work on our EIS,” says Tellus managing director Duncan van der Merwe in a media release.

The EIS process will be managed by Coffey Environments out of Darwin. Tellus lodged a Notice of Intent with the government in November 2012.

Tellus also lodged a referral under the Environmental Protection and Biodiversity Conservation Act (EPBC Act) with the Australian Government’s Department of Sustainability Environment Water Population and Communities (SEWPaC) in December and the project was determined a controlled action.

Under the bilateral agreement between the Australian and the NT government, the assessment of the project under the EPBC Act will occur as part of the EIS process.

The company expects to receive sacred site clearance certificates shortly for the mine site so further seismic work and drilling can proceed in late 2013 to confirm the size and content of the resource and for mine planning required for the definitive feasibility study.

Tellus provided an overview of the project at the recent Australia China Minerals Investment Summit in Darwin in May.