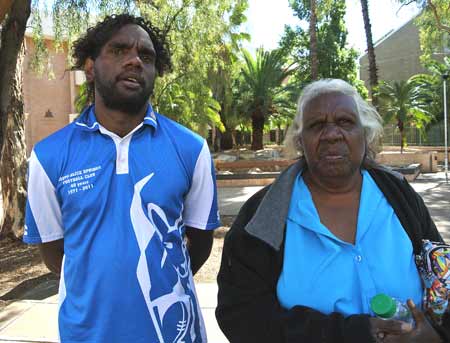 Liam Jurrah, former star AFL footballer, was led from court in handcuffs this afternoon after receiving a sentence of six months (reduced from nine for his early plea) for his part in the joint assault on Jillian Brown outside the 24 Hour Store in the early hours of March 28 this year. The sentence will be suspended after he serves three months and backdated to April 27 to take into account time already spent in custody.

Magistrate David Bamber regards his prospects of rehabilitation as good but described the assault as “outrageous” and “very serious”, particularly as it involved two men in a sustained attack on a woman which continued after she tried to walk away and even after she fell to the ground. Mr Bamber said it was fortunate that the victim’s injuries were not as serious as they could have been.

Mr Jurrah’s co-accused, Mathius Walker, who has remained in custody since his arrest, was sentenced to seven months (again reduced from nine), and for his further assault on Valda Granites, to four months (reduced from six). He is also thought to have prospects of rehabilitation and the sentences will be suspended after he serves six months.

Mr Jurrah also consented to a domestic violence order in relation to his former partner, without making any admissions. The order requires no contact for 12 months.

Two other charges of aggravated assault against Mr Jurrah were withdrawn, as was a charge of causing serious harm.

Lawyer for Mr Jurrah, Tim Sullivan of Central Australian Aboriginal Legal Aid, said his client accepted that his actions were “deplorable” and he was “ashamed” of his behaviour. However, he argued there were mitigating circumstances.

Mr Jurrah’s former partner and his present girlfriend had become involved in a physical altercation. Men sympathetic to his former partner, and of comparable weight, had set upon Mr Jurrah who was coming off “second best”. This was a sustained attack that lasted for minutes, said Mr Sullivan. (This attack on Mr Jurrah was not part of the facts agreed with the Crown.)

Meanwhile, the victim, aunty to his former partner, had picked up a rock and was throwing it at Mr Walker’s car. At her second attempt Mr Jurrah stopped her, but on her third try she succeeded in smashing a rear window. All this occurred in “full view” of security personnel and a large number of Aboriginal people, said Mr Sullivan.

These circumstances were not being presented as “an excuse” for Mr Jurrah’s “retaliatory assault”, but they did reduce his client’s moral culpability, he argued: Mr Jurrah was drunk, battered, his girlfriend had been beaten and his friend’s car smashed.

He accepted that Mr Jurrah’s actions would usually attract a term of imprisonment but argued for a partial suspension of the sentence for a significant period.

Mr Jurrah had been seeking counselling for his binge drinking problem and anger management. Among his references was a letter from the Mediation Centre at Yuendumu, signed by members of the community from “both sides of the former conflicting camps”, saying that they want him back in the community and involved in planning for the Yuendumu Sports Weekend at the start of August, the first to be held for a number of years since the unrest in the community.

Mr Sullivan said his client had also suffered “public opprobrium” (disgrace) and asked that he be given this chance to take his life in hand and become the exceptional young man that he has the potential to be.

In responding Prosecutor Stephen Robson said the “prolonged, cowardly and quite brutal” attack by both men on Ms Brown, 36 years old, showed a “contemptuous attitude to women”. He said Mr Jurrah had punched her twice to the head, once from the front, once from behind, after pushing her from behind. 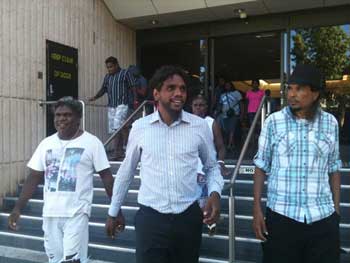 Mr Walker had punched her six times in the head, kicked her twice in the head, before grabbing her by the hair and dragging her along the ground. At this point police had arrived.

Both men aided and assisted one another, he said. He did not put the assault in a specific range of seriousness, but said it could definitely not be considered to be in the lower range.

Mr Walker’s other victim, whom he punched, pushed to the ground and kicked to the head and nose, was 42 years old at the time of the assault.

As to the mitigating circumstances suggested by Mr Sullivan, Mr Robson said Mr Jurrah might have been fighting other men but had picked a “soft target” for his retaliation, who was walking away from him at the time. Her rock attack was not on his car; he didn’t have to buy in.

He said to consider being drunk as a mitigating circumstance, in the context of a “tidal wave” of alcohol-fuelled violence in Alice Springs, would send the “wrong message to the community”.

He also didn’t think “public opprobrium” suffered by Mr Jurrah should be taken into account. Yes, he was a public figure but opprobrium for an AFL footballer would not be of the same order as opprobrium for a judge, for example.

Tanya Collins, lawyer for Mr Walker, said he had taken significant steps over the last six years to remove himself from trouble in Yuendumu and Alice Springs. He now resides with his partner (in court today) and adopted son in Murray Bridge, SA although he has been in custody since the night of his offence.

Ms Collins argued that Mr Walker’s assaults on Ms Brown and Ms Granites, both of them close relatives, were completely out of character. He was “grossly intoxicated” and has only hazy recall of the events. But, she said, he was shocked “to see his own behaviour” (presumably on CCTV footage which was not shown to the court) and ashamed. That is not the person he has been; indeed he has never been prone to “wanton brutal violence”, she said.

At just 32 years old Mr Walker has significant health problems, both diabetes and chronic liver disease. He had stopped drinking over the last one and a half years in response to medical advice. His lapse into binge-drinking on March 28 she put down to a period of frustration and waiting for the funeral of his grandfather to take place. He had been the old man’s full-time carer in Murray Bridge but their extended family was trying raise funds and make arrangements to bring him back to Yuendumu for burial and he had been stranded in Alice Springs, waiting for this to happen.

Ms Collins said her client wants to take responsibility for what he has done and looks forward to having the opportunity to apologise in person to his victims. He accepted that the charges were serious and that a prison term was warranted, however she also asked that his sentence be partially suspended to give him an incentive to continue the good work he has been doing towards a more productive and meaningful life.

Mr Robson, however, argued that there was no positive evidence before the court of Mr Walker’s good character while there was contrary evidence of many breaches of restraining orders, a prior assault (on his former partner, mother of his two children), as well as a conviction for affray in South Australia.

Mr Robson did recognise that the pleas by both men were reasonably early and would justify a “significant discount”.

PHOTOS, top: Liam Jurrah is pictured with his grandmother, Cecily Granites, waiting outside the court today, ahead of his sentencing. Mrs Granites had driven from Adelaide to be with her grandson. • Centre: Mathius Walker (with hat) pictured with Mr  Jurrah during his trial in March this year, when he was found not guilty of causing serious harm to his cousin, Basil Jurrah.