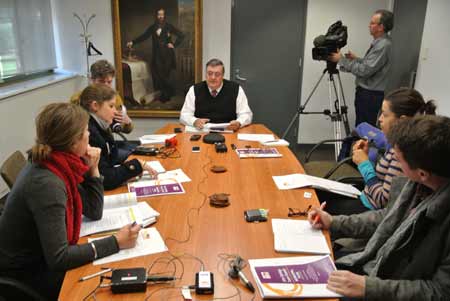 Alice Springs town council rates are proposed to go up 6%, lower than last year’s rise which was 7%.
The proposed minimum rate is $1083.
Rates would raise $18m of the projected 2013/14 Budget of $28.9m.
The rest would come from grants, including the Federal Assistance Grant.
Proposed main expenses are $3.94m for capital works, $1.8m for sporting facilities, $1.2m for parks and reserves, $1.7m for roads and $1.4m for the library of which the NT Government will contribute $572,000.
The Draft Budget will now be before the public for comment for 21 days.
Mayor Damien Ryan says reasons for the proposed increases are sharply higher power, water and sewage costs as well as the carbon tax – $80,000 this year – which had not been expected before 2017.
The council will be running the aquatic and leisure centre from July 1, but the charges are not proposed to go up in 2013/14.
The Municipal Plan released this morning shows steep expenditure increases in the forward budgets, about 25% by 2016-17, to $35.8m.
Asked whether that indicated deferral of major expenditures Mayor Ryan said: “Let’s look at this year. This year we are discussing a 6% rate revenue. That’s what we are discussing. Nothing is deferred at all. What’s probably deferred is the $100m worth of wish list.”
Photo: Mayor Damien Ryan at this morning’s announcement to the media of the proposed 2013/14 town council budget.