The cover of The Long Weekend in Alice Springs suggests that the story it tells will be a road trip. And it is one, of sorts. You won’t find these roads on any map but they will lead you into the byways of this desert place, reaching back through history into stories of origin, reaching out through darkness, real and metaphoric, into stories of now.

The starting points are several, all at once. There’s the meeting of Joshua Santospirito and Craig San Roque, a young man and an older man, one a psychiatric nurse with a drawing gift, the other a psychologist with a lyric gift. There’s a campfire and in its flickering light, a woman in mourning. Her husband has died but her grief goes deeper than this. There’s a book of quite a different order, Jungian explorations of the contemporary world, and a request for San Roque to make a contribution. 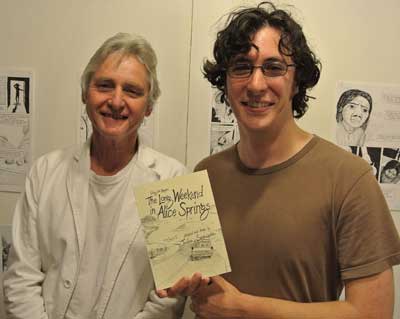 So, setting out from the meeting of the two men, for the sake of simplicity in this text, with its limited means of typed words on a screen, destined for a journalism site. These are limits that The Long Weekend is marvellously liberated from, due to its form as a ‘graphic novel’ or ‘comic’ (words that don’t quite rightly describe it); due to Santospirito’s artistry; due to the soaring and delving of San Roque’s mind and pen.

Santospirito, frustrated and raw from his experience of working in remote mental health, met San Roque, seasoned by long years of the same, but also resilient from a deep nourishment – as we learn from his essay at the end of the book – by Jungian psychoanalysis, thought and practice. San Roque gave Santospirito some of his writings, including an essay, ‘A Long Weekend in Alice Springs’, his contribution to The Cultural Complex: Contemporary Jungian Perspectives on Psyche and Society, edited by Thomas Singer and Samuel L. Kimbles (Brunner-Routledge, 2004).

There was no sudden illumination that explained everything or showed a way forward but Santospirito found the writings “somehow useful” and began to draw his way into San Roque’s ‘Long Weekend’.

He takes us to the campfire in San Roque’s backyard and in just a few deft black and white images envelopes us in the thickness of this night, the deep well of loss that has brought Manka Maru to this point, by this fire.

Craig’s door opens into the backyard. It’s Friday and Warlpiri family from the bush join Manka Maru. They’ve come in for the footy match; among them, a young man damaged by petrol sniffing, one of many in Craig’s professional care. The visitors interrupt Craig’s concentration but it’s a fruitful interruption: he will find his way into thinking about cultural complexes by describing what happens on this long weekend. 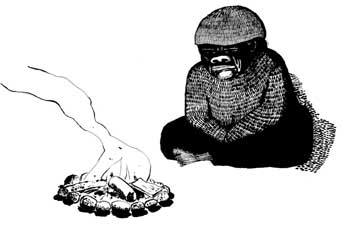 Some of what happens is eventful in a road trip kind of way – like going hunting with the Warlpiri visitors who arrive in increasing number. Some of it is eventful but bleak as Craig, the ‘shrink’, goes about his work, in the court, at the hospital, by the roadside where a man, who believes he is the King of Iraq, is sitting in his car with his three-day dead dog on the back seat. This episode kick starts the deeper journey, a haunting, at times thrilling excursion into our psychological inheritances.

Is the ‘King of Iraq’ a refugee from another time, Craig asks himself. And his mind wanders to the mythical Middle East and the story of Inanna’s grasping, ruthless attempt to bargain with death. (Santospirito’s drawing and mise en scene make the story wonderfully vivid.) The cure for some our ills would be an “assurance of immortality”. It’s part of what Craig knows the King needs. But short of that, what?

Craig remembers his meeting with an old Warlpiri man who told him to mind his own stories. That counsel fell on fertile ground, for Craig / San Roque is deeply in love with story, alive to the unfolding stories around him, to the ancient stories, the ones carried forward in our classical Western culture, the ones from the Aboriginal “dreaming system” (in so far as they have been shared with him). “The human psyche loves processing its own thoughts,” Craig thinks. If we lose the ability to do this, we “fall helplessly out of being.”

This has happened to Teresa to an extreme degree. Craig visits her in the psych ward. She’s trapped in a “cannabis-induced psychosis” but it’s more than the cannabis, more than the petrol that preceded it, and her scarifying life experiences. “Something in the cultural lobe of her brain allows her psychic demise.” 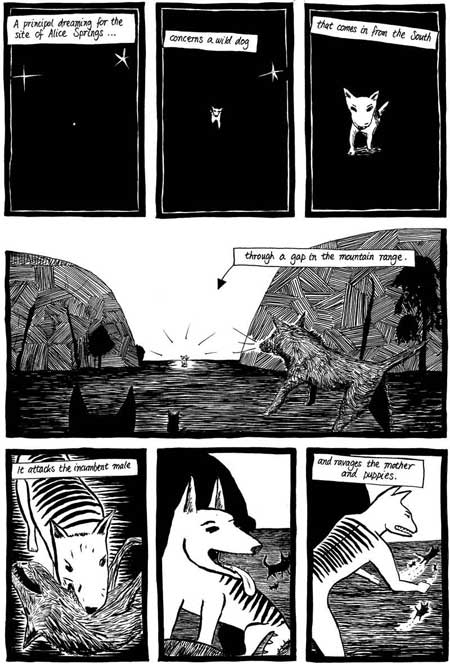 resilience in face of the tides of history. Craig picks up a male friend, Amos, to join him on the hunting trip with the Warlpiri women and children. Amos is of middle European and Jewish lineage – a strong bloodline in dispossession. Around the campfire, cooking lizards, Napaltjarri tells the children, black and white, about the travels of Malu (kangaroo) from up North.  Amos and Craig sit to the side – Craig’s still wrestling with his writing task and enlists Amos’ help. They try tracing some travels of their own, the big shifts of people from their lands in Europe. Amos suggests that the Gypsies and the Jews were less vulnerable to the cultural breakdown this caused because they’d “learned to use cultural memory in a special nomadic manner”.

We are introduced to the ancient Arrernte stories of Alice Springs, particularly the wild dog story, inscribed in the local landscape. The dog came through Ntaripe (Heavitree Gap), attacked the incumbent male, ravaged the mother and puppies. The Mount Gillen ridge and much of the land on the western side of the river were formed by the activities of the dog. Alice Springs is built on this mythic event, a dogfight and a rape. “Serious dark men might whisper the details.” This is part of the psychological inheritance of those to whom this cultural memory belongs – as well as those in the “overlap”, as Craig describes it, between Aboriginal and non-Aboriginal cultures: “Sites do things to people.”

When memory is encoded in sites and song-cycles, as it is in classical Aboriginal culture, and the links to these are broken, depression and malaise follows. This is affecting (to greater or lesser degrees) all who live in contemporary Alice Springs – not just in the shadow of broken Aboriginal songs, but in the shadow of non-Aboriginal people’s own cultural disconnections as well as the contradictions between the Christian and colonising projects that are the foundation of our nation. If I’ve understood it rightly, cultural complexes get people stuck in this brokenness and this contradictory space.

“We can save ourselves with imagination.” It’s the closest thing to a ‘solution’ that can be put between inverted commas. And the book enlists us at every page into acts of imagination through the alchemy of Santospirito’s and San Roque’s gifts. Some of Santospirito’s drawings are exceptional in their emotional power, and the multi-layering through space and time that the comic book form allows makes for rich story-telling. Combine this with San Roque’s poetics, the depth of his thought, and the heart of both men, and you have a book, a travel guide for our place and time. Read it and you’ll never think about the town’s ‘social problems’ in the same away again. Read it and you’ll never look at Alhekulyele (Mount Gillen, the nose of the ancestral dog) in the same way again.

At present, The Long Weekend in Alice Springs is also an exhibition at Watch This Space in George Crescent. It shows the comic book in the making, the drawings that appear in its pages and more, as Santospirito worked on his adaptation. Until June 7.

By GEOFF MIERS Ready for something bigger in your back yard? Central Australia has some fantastic trees suitable for the home garden. The iconic Ghost Gum...
Read more
Issue 11