Home Issue 8 No risk from uranium, thorium at mine near Alice: chairman
Issue 8Issue 9Volume 20

No risk from uranium, thorium at mine near Alice: chairman 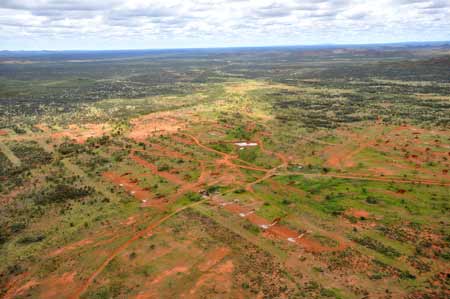 Radioactive uranium and thorium to be stored near the proposed Nolans Bore rare earth mine 135 kms north of Alice Springs will present no danger to the public, says Arafura Resources chairman, Ian Kowalick.
He says the materials are at the site (pictured) already, they will simply be stored in a different form, and would have been returned to the mine even if the separation from the rare earth had been done at Whyalla.
Mr Kowalick says the precise volume of the radioactive material would depend on the volume processed.
“It is actually low level radiation in both the uranium and the thorium.
“We are not beneficiating the uranium and the thorium to much higher levels.
“It inevitably happens, if you dig up rare earths – and you can’t have windmills and electric cars without rare earths – it is always associated with uranium and thorium.
“The original plan was to return these to the Nolans Bore site and that’s still the case with the new proposal except the processing will happen at the site.
“But this is a very low level waste.
“I always make the example if you sit on the steps in Parliament House in Adelaide you get a much higher level of radiation from the granite than you will from our tailings.”
What is the halflife of the material?
“Uranium and thorium have a reasonably long half life, but the material is coming from the site originally, so it’s not changing the net level of radiation and changing the half-life there. The material is there and this is just changing the physical from of it.”
Is it coming from deep below the ground or is it coming from the surface?
“This is a mine which is essentially quarried quite close to the surface.
“We’re not digging a big hole,” says Mr Kowalick.
The materials “will be separated out and put in a form that can be safely stored.”
Are there similar storage sites elsewhere in Australia?
“There is lots of radioactive material stored in Australia, from processing activities.
“The circumstances are not unusual. The technology to store these low level radioactive materials is quite well known. It is certainly much lower in radioactivity than industrial waste from X-rays and things like this.”