Home Issue 7 Water – who is advising whom on what?
Issue 7Issue 8Volume 20

Water – who is advising whom on what? 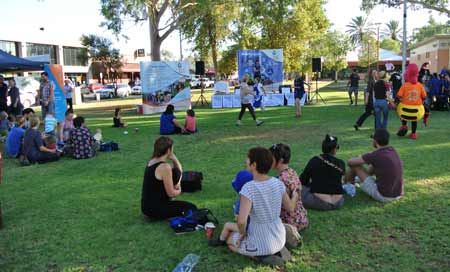 If the government decides to limit Alice Springs for a further five years to roughly its present consumption of water, will they be saying they are acting in line with the wishes of the town?
The task of the local Water Advisory Committee includes giving advice on the Water Allocation Plan which, controversially, mandates a cap for Alice Springs of 10.7 gigalitres a year.
One member of the committee says he didn’t see the current draft plan until it was made public three weeks ago, on March 22, and the deadline for public comment is on Friday.
Another committee member says the draft was floating around last year, but was kept under wraps, presumably for fear of it being not a good look ahead of the August elections.
Or was that the old five year plan which, in essence, is being renewed?
To what degree the committee represents the town seems set to become a point for lively discussion.
The group has no decision-making power – it is merely advisory.
It has no budget for public consultation nor opinion surveys and hasn’t formally conducted any.
It held five meetings in 2011 (the minutes are on the web).
It held just one meeting in 2012, on October 10, with the Alice Water Plan on the agenda, but the minutes are not on the web.
Steve Brown, the council’s appointee to the committee from 2012, says he went to attend that sole 2012 meeting but couldn’t find the venue, and there was no phone number on the notice paper.
The News has been shown the emailed invitation, and it does have a phone number, that of Anne Pye, the Southern Region Water Resource Planner, who had called the one-hour meeting.
Cr Brown now says he had looked at the invitation, noted the address (Level 1, Alice Plaza, Todd Mall) but not the phone number. Cr Brown lives about 20 kms out of town and he says there wasn’t time to go back and check the phone number.
So that was that for the Town Council’s involvement, during all of last year, in this issue that is clearly immensely vital to the future of Alice Springs.
The town’s other principal lobby, the Chamber of Commerce, did not express a view about the cap, although its deputy chairman, Steve Shearer (the manager of Thrifty Hire Cars – he is on holidays till tomorrow), is the chairman of the Water Advisory Committee.
“The issue has not been highlighted to us at all,” says Chamber CEO Kay Eade.
Last week the Department of Land Resource Management held a “public” meeting which was attended by about 15 people.
The committee’s other members are Rod Cramer (who has a property at Temple Bar which relies on bore water), Jimmy Cocking (who heads up the Arid Lands Environment Centre – ALEC), Brenda Shields, Ritchie Hayes who manages a profitable vineyard south-east of the town, and a representative of the drags club.
Mr Cocking said he attended the group as ALEC’s representative. The view he put forward was that the consumption cap should not be raised while there is much wasting of water and resource efficiency is so low, in part because of defective pipes and excessive pressure resulting from badly planned tanks around town. People are also inadvertently wasting water due to leaks and inappropriate irrigation regimes.
Mr Cocking says there are more significant issues holding back the development of the town: Water is a “tiny factor” when compared to cost of living, land prices and economic stagnation resulting from the GFC.
He says there is no sign of the town growing, nor any resulting demand for more water.
The cap is only on town water – for horticultural uses growers can apply for permission to sink bores and for water allocations.
Mr Cocking says a far more pressing issue for the planning of the water supply is that water used in mining, gas and petroleum projects is not included in the Act: “They can use water without any record of usage,” he says.
He would like to see the Water Advisory Committee become more involved in the process, “not just ticking off” but be consulted on decisions, and be able to engage the community.
“We don’t have an operating budget,” he says.
Mr Cramer shares Mr Cocking’s view about the mining issues: “If [the possible future uranium mine] Angela Pamela came along again they could use as much water as they like.”
This could well interfere with the town’s water supply.
Mr Cramer says there needs to be a cap, but without saying how much water use it should permit: “You can’t just have a free for all.”
And Mr Cramer says the committee was not shown the current draft Water Allocation Plan until it was launched on March 22 this year, three weeks ago.
PHOTO: Community breakfast at which the controversial draft of the Water Allocation Plan was made public.