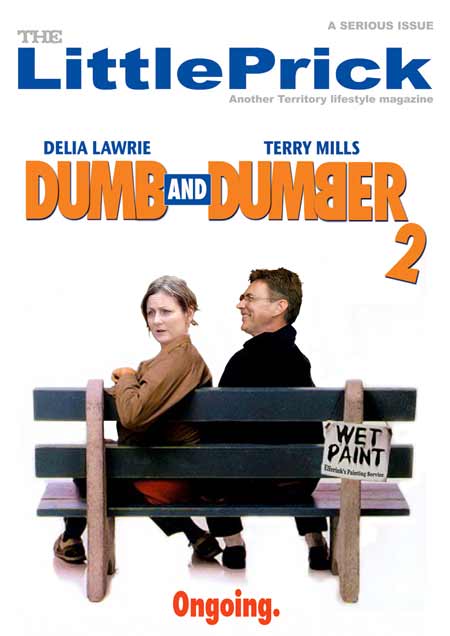 It has been a hectic nine months since the inaugural LittlePricks exhibition – a change of government and some of the worst political infighting the Territory has ever seen. The CLP government is keen to move on and have us forget their antics.
But people won’t forget thanks to the keen, and perhaps cynical, eye caste over proceedings by Territory artists. While the pollies have been slugging it out our local artists have also let rip. Like many Territorians they haven’t been impressed and have put it all down in posters of photomontage, cartoons and incisive text.
Their work really makes a truth of be careful of what you say and do because, like a wily blue dog, it could come back and bite you.
The LittlePrick Editions Vol Two exhibition – From Little Pricks Big Pricks Grow – opens at Gallery Two Six, in Winnellie on April 5 and runs for 14 days.
The exhibition takes the form of magazine covers or posters, imitating the wave of lifestyle magazines that have washed over Darwin in recent years, only with headlines and images you are never likely to see.
The LittlePrick magazine derives its name from comments by a former Territory government minister on Darwin radio when he described Aboriginal children who burned an Australian flag.
Unlike Darwin’s other lifestyle magazines, the LittlePrick doesn’t buy into political, business and lifestyle “spin”; it challenges our sensibilities and asks … what are we getting ourselves into?