Eviction cruel or a necessity in a desperate housing market? 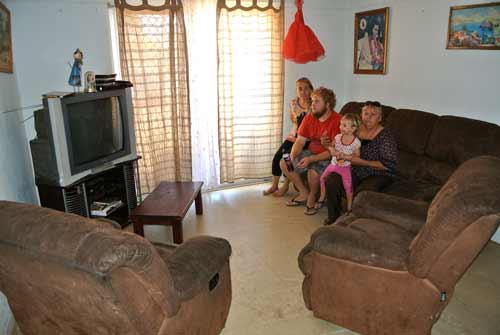 The starting point for my conversation with Bronwyn Ferguson was the impending eviction of her and her family from a Territory Housing home in the Northside where her son Dennis Novak, 23, has lived all of his life, her son Kim Novak, 25, for most of it, and she, from 1994 to 2004 and from 2007 till now.
The eviction results from the death from heart failure on January 3 this year of Fred Mulholland, Mrs Ferguson’s partner of many years, and the holder of the lease.
Two months before dying Mr Mulholland had signed a statutory declaration seeking to transfer the lease to Mrs Ferguson.
More recently Mrs Ferguson and Dennis signed a statutory declaration agreeing to the eviction – but only after the incessant badgering from Territory Housing, she says.
Dennis had been the full time carer, in the house, of Mr Mulholland for the last months of his life.
Dennis and Kim are attached to the house and so are the three children of Mrs Ferguson’s daughter, Tiarah Ferguson, who spend much time with their grandmother.
There are no signs of the wanton vandalism to which some public housing in Alice Springs is subjected – in fact the house and yard are kept neatly, judging by what I saw during my visit this morning. The decision of Territory Housing appears harsh, if not cruel: Not only have these people just lost their partner, stepfather and step grandfather, but they will now also lose their home.
We will offer Territory Housing a right of reply after this long weekend, but the following is likely to be their position:-
In view of the extreme shortage of public housing, a three bedroom home cannot be allocated to a family unit that now only consists of two people, Mrs Ferguson and Dennis. The addition of Kim to the application occurred later, it appears, and may well trigger a review.
For the moment Mrs Ferguson has been offered a two-bedroom unit.
But she says it is in a complex “full of murderers, stabbings, mixed tribes clashing, drinkers and drug addicts”.
She doesn’t want to go there.
And neither was she prepared to move into a complex mostly for aged people where a self-appointed caretaker closes the gate a 8pm.
There is a much broader picture.
Mrs Ferguson, aged 55, has a respectable CV, including as the head cook for two Aboriginal hostels in Alice Springs, preparing hundreds of meals a day for the Tangentyere meals on wheels program in 2004, and completed TAFE courses for basic skills in computer use, as well as dealing with hearing impairment, diabetes and dementia.
Both her sons seem to be strong and healthy, although she herself has a string of diagnosed illnesses.
Kim had worked with her as a kitchen hand in her previous engagements as a cook but “our contract wasn’t renewed,” she says.
Dennis had worked “out bush” before becoming his stepfather’s carer and will now be looking for work.
Why should three people capable of working be in public housing in a town that has a chronic shortage of labour, and be living on $510 “Newstart” a fortnight?
Mrs Ferguson says there has been a transformation in the attitude towards work in Alice Springs.
She left school 40 years ago – aged 15 – and immediately entered the workforce.
Her stepmother, an Aboriginal woman from TiTree who had been taken away as a baby, had taught her housekeeping skills and she applied them to jobs mostly in the mainstream economy.
She worked for the Oasis Motel, Melanka Hostel and “Underdowns” – the colourful pub that burned down where The Diplomat motel now stands.
At the age of just 17 she took a job with Yirrara College that was run by the government at the time, and earned $2500 a fortnight – a huge income on those days.
By comparison she made just just $18,000 a year in her recent cooking jobs.
The prospects today for her sons seem less encouraging, partly a consequence of terrible family tragedies.
It is uncertain whether Kim will again be hired as her assistant if she lands a new job. She has applied to Tangentyere which is advertising the job she had there previously, and she hopes he will.
Both she and Kim suffer from depression. Mrs Ferguson is in counselling.
Kim finds it hard to get over two bashings by thugs in an Old Eastside lane way, 14 stitches in his head and eight in his forehead, partly inflicted with a broken bottle. In neither case were the perpetrators brought to justice.
He spends much of his time at home. When I asked him if he’s been out job hunting he looks to his mother for an answer.
He gets angry a lot, she says. She has urged him to seek anger management advice.
Each of the young men had been left $74,000 by their father, to be paid to them on their 18th birthdays.
Mrs Ferguson says she had tried desperately to delay this to their 25th birthdays.
The money was gone in a month: “They had all the friends in the world while it lasted. Now they have none.
“We should have put down the money as a deposit for a house.”
The darkest clouds over all their lives are the suicides of Kim’s and Dennis’s father in 1993 and Mrs Ferguson’s brother the year after.
“He talked to me about my depression,” she says, “that people quite often commit suicide when they are depressed.
“I know the feeling, your throat gets so tight you can’t swallow.
“When I realised my brother was talking about himself it was too late.
“I found him. He’d blown his head off. I hugged his body. His blood was all over me. I will never forget that.”
An important person in his life had fallen victim to alcohol, gambling and the kind of extortion passing for family obligation in some Aboriginal societies. It had all become too much for him.

By ERWIN CHLANDA History was made in the Bungalow, now better known as the Overland Telegraph Station, as the place where taken-away children were interned,...
Read more
Issue 7

Police describe as a "horrific and terrifying incident" the assault on a woman early yesterday evening on the south Stuart Highway near the Old...
Read more
Issue 7

Nature, markets kind to cattlemen. Crime, officialdom are not.

By ERWIN CHLANDA It’s a room full of smiles as cattlemen are gathering for their annual meeting after record rains and beef prices in the...
Read more