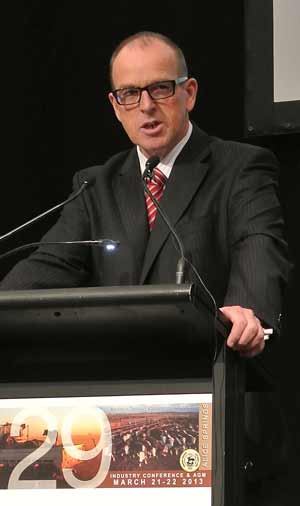 The elephant in the room at the Alice Springs Convention Centre – where 350 delegates are attending the NT Cattlemen’s Association annual conference – is Indonesia, which takes over 45% of Australia’s total live cattle exports, said Joe Ludwig, Federal Minister for Agriculture (at right).
It was harmed catastrophically after the ABC’s Four Corners showed examples of cruelty during slaughtering in Indonesia.
Sen Ludwig told the conference: “It is our closest overseas market, and it is critical” and steps taken to shore up its future “were not easy, but they were necessary”.
Emeritus Professor David Hughes from the Imperial College London, gave the conference this food for thought: beef world-wide costs twice as much as other meats.
A tonne of horse meat costs 1500 pounds, compared to 4500 pounds for beef, with a difference in taste most people would not detect.
Animal rights offences must not occur in the supply chain: the industry must win “society’s permission to operate”, said Prof Hughes.
Sen Ludwig said the reforms by the Government and the industry “have improved the long term sustainability of the trade”.
‘Disgraceful’ performance
But while he claimed that Northern Territory farm business profits are steady, farm cash incomes expected to increase and cattle slaughter  forecast to rise, long term Central Australian pastoralist Tony Davis said the performance of Sen Ludwig’s government over the past two years had been “disgraceful” and he had a hide to even attend the conference.

Mr Davis (at left), who owns Miroak Station in the Top End as well as Milton Park, Amburla and Hamilton Downs in The Centre, said government actions had “halved the capital value of all properties in north Australia”.
Sen Ludwig replied the industry needs to ensure the “supply chain” is beyond reproach with respect to animal welfare and “most Australians will agree”.
And while “not everyone wants to have the [live export] industry to continue” he wants to progress it.
During his address to the conference Sen Ludwig said while there had been slightly lower saleyard prices, gross value of production was forecast to remain stable.
Indonesian target
In 2009, Indonesia announced a self sufficiency target for beef, with a target completion date of 2014, resulting in “systematic reductions in import quotas from 2010 onwards.
“Trade was further affected by the implementation of a weight limit for exported cattle in March 2010.
“This had been in place since 2008, but in 2010, Indonesia implemented it,” said Sen Ludwig.
“Now, there is again potential for growth in the beef market in Indonesia.
“The Indonesian government is looking for ways to increase average consumption of beef in the country from two to 20 kilograms on a per capita, per year basis.
“Opportunities to export breeding stock continue to grow as many countries in the Asian region, like Indonesia, look to establish their own herds. 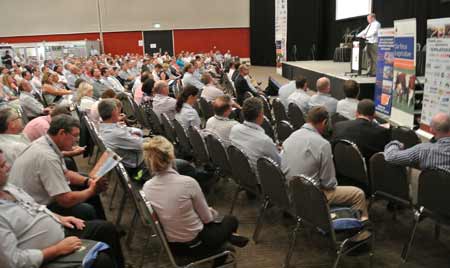 “This should not be seen as competition, but as an opportunity to assist our trading partners to reduce poverty and address food security. It also drives the popularity of beef in a growing market.”
Forecast
Sen Ludwig said the Australian beef industry is forecast to increase by 3% this coming year.
Beef exports will rise to a record one million tonnes this year, or $4.7 billion.
Exports to the United States are forecast to grow by more than 20%.
Exports to the Republic of Korea are predicted to increase by 13%.
Beef exports to Chile have increased to more than $100 million – a direct result of the removal of costly grading requirements.
Reduced tariffs have meant beef sales to Vietnam have almost doubled in the past three years, now valued at around $19 million in 2011/12.
Asian Century
“We have announced a strategy for our engagement with Asia, the Asian Century White Paper, with a specific agriculture focus. That strategy will help our producers to make the most of the food boom,” said Sen Ludwig.
“We recognise the northern cattle industry is made stronger through local investment. Under our Nation Building Program we are investing an unprecedented $636 million over the six years to 2013-14 to rebuild and renew the Territory’s road infrastructure.
“Already, Labor has nearly doubled annual infrastructure spending from $275 to $458 per Territorian.
“Our capital works program includes better roads for the Territory’s cattlemen and other primary producers.
“Work is nearly complete on our Northern Territory Community, Beef and Mining Road Package – a $108 million package that is improving road safety and access for local communities and agricultural industries.
“Already this package has improved flood immunity on Port Keats Road, upgraded sections of the Plenty and Buntine highways, Central Arnhem Road, Tanami Road, Maryvale Road and the Hughes Stock Route.”
Truckies to benefit
“This month, the Government announced a further $10.3 million, in partnership with the Territory Government and industry, to improve road facilities in the Territory for long distance truck drivers.
“This new funding will be used to strengthen bridges on the Buntine Highway, strengthen and widen the pavement along the Carpentaria Highway and upgrade or provide truck parking bays on Tanami Road and the Lasseter and Plenty Highways.
“Funding will also be used to construct cattle loading ramps for Bohning Cattle Yards and upgrade road access to the Northern Australian Beef Limited Abattoir site.
“Separately, we are also investing in works on the Stuart Highway between Alice Springs and Darwin. These works are building extra overtaking lanes, strengthening and widening sections of the highway and improving the highway’s flood resilience.”