By KIERAN FINNANE with video by ERWIN CHLANDA

His family and friends clapped and cheered in the court when Liam Jurrah was found not guilty by unanimous verdict this afternoon just before 2pm, but the man himself only smiled quietly. As he left the dock where he has sat for almost two weeks, he hugged his counsel Jon Tippett QC.

Outside he was immediately surrounded by media and, with a beaming Mr Tippett by his side, he calmly fielded questions: he said he was feeling happy, that he hoped that the trouble in his community is over and that he wanted to get back to his footy.

His dream is to return to the AFL and to make his families happy again. As a first step towards this he’ll head back to Adelaide. Tonight he is just going to “lay low” with his family.

Mr Jurrah’s grandmother Cecily Granites said she had been “really nervous” before the verdict but was now “really happy”.  She very much wants to see her grandson to return to professional footy: “It’s really important, not  just for my community but for all remote communities,” she said.

Earlier she told the Alice Springs News Online that her grandson would go back for a while to Yuendumu. Asked whether he would be safe there, given the simmering animosity between rival family groups, she said: “It’s his home community, we’re his family [gesturing to the people all around her], he’ll be right as long as he has his family to protect him.” 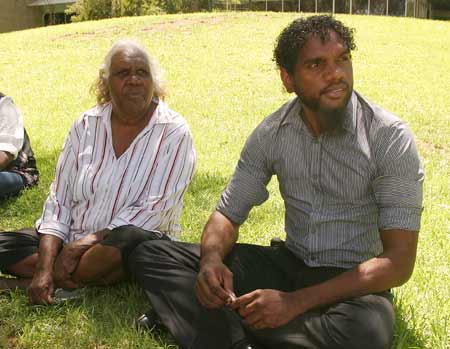 Was she worried about any kind of payback? “No, she said, “we’ll look after him.”

So whatever would be said in court today would finish it? “Yes,” she said, “finish. He’ll be right.”

At left: Cecily Granites with her grandson Liam Jurrah outside the court during the week.

The News put the same question to Harry Nelson, a prominent elder at Yuendumu and an uncle “Aboriginal way” to Liam Jurrah. He has been in court from time to time to support the young man and was present today. He said he was pretty sure there would be no payback although he did not entirely discount the possibility of a “bit of a punch up” between Basil Jurrah and Liam Jurrah further down the track.

Basil Jurrah is currently in custody for an offence unrelated to this trial, in which he was, of course, the alleged victim of serious harm. Two other men, Christopher Walker and Josiah Fry, have pleaded guilty in relation to the harm done to Basil Jurrah on the night of March 7 2012. They were to be sentenced today but that was delayed while the verdict for Liam Jurrah was awaited.

Mr Tippett added to his comments in the courtroom about the police investigation in this case: “The Northern Territory police generally investigate very well, they have good protocols and bring to the court very, very tightly investigated cases. This wasn’t one of them and it could have [resulted in] an injustice, because really as we know, justice begins with a good investigation. You can’t go into a courtroom with a bad investigation and have a jury fix it up for you. Juries won’t.”

He described Liam Jurrah’s record of interview with police as “outstanding”: “He told it as it was, told his story.”
[youtube]http://youtu.be/lCXC5pSAULs[/youtube]


LINKS TO OUR ARCHIVED COVERAGE OF THE LIAM JURRAH TRIAL, in reverse chronological order:

Liam Jurrah: guilty or victim of a botched process?

Jurrah: No crime scene, no search for weapons, an ‘oversight’

Serious harm to Basil Jurrah not in dispute


Alleged victim in the witness box


Did he smash a car?


Witness lied to police “under pressure”

Did he have a weapon in his hand?