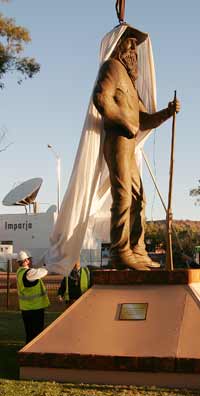 The Freemasons-sponsored statue of John McDouall Stuart by Mark Egan (pictured during its unveiling followed by immediate removal) will be returning to the town centre. It won’t be at the first choice of location, the council lawns. It won’t be at the number two choice, either, about half way between the former Memo Club and the roundabout outside the Flying Doctor Service.
It will be a bit further to the west of that, still in Stuart Park, following the approval by the Heritage Advisory Council of the council’s application, last night’s Town Council committee meeting was told.

The town is a big step closer to kicking in the butt the problem of feral trolleys.
If you’re shopping in Coles and try to cart your goodies past the edge of the car park, the electronic signal from a buried wire will lock one trolley wheel and that’s as far as you go.
Town Council director for Corporate and Community Services Craig Catchlove told last night’s council meeting that virtually no Coles trollies are found at large these days. The only ones still being recaptured are a few old ones that have been at large for some time, and are not fitted with the braking system.
Mr Catchlove said Woolworths is still having problems, needing to redeem 30 to 40 trollies each month at a cost of $110 each. The alternative would be to risk a fine. That hasn’t happened yet.
The council impounds trolleys left outside the CBD – inside it the council encourages collectors to do their job.
It’s understood that things got worse for Woollies with the introduction of Coles’ syst 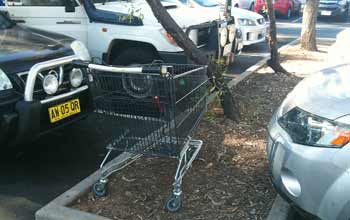 em: Some shoppers take a Woollies trolley to the edge of the Coles car park and transfer their goodies.
Woollies were proposing to include the Hartley Street car park in a “wired” system similar to that of Coles but the council said no.

The council, on present plans, will shut down its wine and spirits bottle collection when Territory Metals closes down as a result of the Federal Court’s CDL decision.
Mayor Damien Ryan and CEO Rex Mooney stressed that to run the council’s scheme as a stand-alone would be very expensive. Mayor Ryan said when the decision was announced the council’s officers decided first to stop the glass collection but when Territory Metals decided to stay open for a little longer, it was continued to take advantage of this. As an “operational decision” it was properly a matter for the staff.
But Cr Jade Kudrenko said issues of recycling should be a matter for the elected members to decide, not the staff, and there should be further discussion.

The council is investigating the installation of WiFi in the mall, but the NT Government has signaled it may have a solution, so it’s a “wait and see,” says Mr Catchlove.

If you think you got away with it, think again. That fine may still be coming. It’s just that the NT Government’s Fines Recovery Unit (FRU), which does the council’s collecting, is still sorting out problems. Mr Catchlove clearly isn’t impressed with the arrangement: once the instructions are passed to the FRU the council “loses control” over the process. It gets a cheque from time to time but isn’t told who has paid and who has not.
The council had considered doing the collection themselves but this was judged to be too ineffective. Using the Small Claims Court, for example, is far less efficient and effective than using the broad powers of the FRU.
And private collection agencies didn’t want to know about it, either: the amounts are too small.
Meanwhile, the council rejected a suggestion by Cr Geoff Booth for an increase in fines. The proposal was put on hold for six months, after discussion with support also from Cr Booth.
It is understood the Alice Springs Town Council already has the nation’s highest fees.

Mr Catchlove’s report says the number of people “spoken to in the river has decreased steadily since the Banned Drinkers Register has been dissolved.
“Many people who were frequenting the river have all moved back to the camps.”

Mayor Damien Ryan, who gives monthly reports to the council about his activities, suggested the councillors may like to do the same – in an informal, verbal manner. The idea was adopted unanimously.

Not only will the civic centre dunny stay open on weekends, that fact will also be promoted in visitor guides. Cr Brendan Heenan said it is a vital facility for locals and tourists alike. Especially grey nomads welcome such an amenity. And Mayor Ryan suggested the attendant could be doing an “emu parade” outside from time to time, picking up rubbish on the council lawns. Director of Technical Services Greg Buxton said he would take the idea “on notice”.