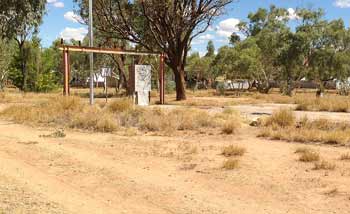 Tangentyere Council needs to come clean with the taxpayer about how it spends the $43m a year it gets from the public purse, says NT Minister for Indigenous Advancement, Alison Anderson (at left).
The CEO Walter Shaw has not responded to requests for comment from the Alice Springs News Online. [We are looking forward to details from Lingiari MHR Warren Snowdon after making a request to a spokesperson for him.]
Ms Anderson says Tangentyere, previously responsible for all or most of the town’s up to 19 camps, is now looking after fewer than half of them; is failing to stem the “rivers of grog” despite the camps’ “dry” status, is incapable of curbing extreme violence; and is treated by the Shaw family as its private “dynasty”.
The Shaws also seem to regard the publicly funded town camp of Mt Nancy as their own private property.
Mr Shaw and previously his father, Geoff, have repeatedly refused to disclose details to the News of Tangetyere’s spending.
Ms Anderson says: “Are they interested in people who live in town camps? Of course they are not. That’s why we still have the problems in the town camps.”
She says Tangentyere is getting $35.5m from the Commonwealth: “It’s come to the stage that we have to start asking questions as to what they are doing with Territory taxpayers’ money because we can’t see any results,” she says.
Funding from the NT amounts to $7.5m but this will be reviewed, she says, as the effectiveness of the programs funded – including night and day patrols and services for children – is put under the microscope.
The camps’ infrastructure and services have also been supplemented by millions of Federal dollars – a large slab of the $150m Alice Springs Transformation Plan as well as SIHIP money.
The Alice Springs Town Council has an MOU as a service provider to the camps (delivering rubbish collection and dog control services, for example), further reducing Tangentyere’s responsibilities.
Add to that the cost for ambulance, police, child protection workers looking after camp kids who are wandering around the town while their parents are drinking: “A huge amount of money [is paid to Tangentyere for] doing nothing. It just disappears,” says Ms Anderson.
“Territorians are not begrudging Aboriginal people from getting money as long as they are seeing bang for bucks,” she says.
“They want to start seeing results, their money having an effect on people’s lives, kids going to school, kids being safe, women not being killed, women not even being flogged.”
Ingkerreke Outstations Resource Services looks after nine of the current 16 town camps. It gets no money from the Feds and has provided a detailed spending break-down (see below).
CEO Scott McConnell says Ingkerreke has a policy of complete transparency about the public funding it gets. The organisation also obtains work in the open tender system.
Ms Anderson made her comments after walking out of a meeting called by Tangentyere last week because it refused to admit Mr McConnell.
She also says: “There need to be plans for each town camp. Every camp should raise the bar of behaviour.
“[Drinking is barred in the camps] so why is there all this grog?
“Mr Shaw is not doing anything about it. This has been going on in the last three and a half years.
“It’s not something that started five and a half months ago [since the election won by the Country Liberals].
“We must normalise the camps, to be part of Alice Springs.”
But would that not end the drinking ban?
“Normalising doesn’t mean you buy seven cartons and drink yourself to death.
“You take half a carton home and drink it after work,” says Ms Anderson.
PHOTOS: Garbage in Charles Creek in 2010. The same location on Wednesday this week, after Ingkerreke has taken over from Tangentyere clean-up and parks maintenance functions.

[Mr McConnell released to the News a letter from the NT Department of Housing, Local Government and Regional Services assigning to the Ingkerreke Outstation Resource Centre municipal services in nine town camps in the six months to December 30, 2012.
The value of the contract was $189,883 (GST exclusive).
The services were fortnightly removal of collection from parks, gardens, roadside verges and common areas; skip bin service to each town camp on a bi-monthly rotation; urgent rubbish removal following a significant event; mowing and slashing of parks, gardens, common areas and road verges as required; fire breaks as required; tree lopping as required; road and footpath maintenance; weed eradication as needed; and fence maintenance as needed.
The camps were Walpiri, Charles Creek, Trucking Yards, Morris Soak, Anthepe, Little Sisters, Old Timers, Ilparpa and Ilpiye Ilpiye.

By ERWIN CHLANDA A Country Liberal Party Government would amend the Bail Act to ensure that repeat offenders face the consequences of their actions, say...
Read more
Issue 3

Greening a carpark – lessons for the baking acres in town centre

By KIERAN FINNANE The site was “brutal”: the concrete forecourt of the former Oasis garage, facing west, unfenced, often used as an informal carpark. That was...
Read more
Issue 3

A man in two worlds

By JOHN P McD SMITH By the 1960s there were Aboriginal people who were becoming prominent in Australia: Albert Namatjira, Charlie Perkins and Lowitja O’Donoghue...
Read more