Meeting of minds on the shores of a desert lake

In 2008 a flaked stone cobble was unearthed on the shores of Paruku, known in English as Lake Gregory. The latest dating techniques put the stone at 45,000 to 50,000 years old, its flaking (for tools) evidence of ancient human habitation at the site. It was a landmark archeological find but nothing surprising for the Walmajarri traditional owners: they knew their ancestors had always been there, since the Waljirri (the Dreaming). This story is but one of the intriguing strands of an exhibition and book, both titled Desert Lake – Art, Science and Stories from Paruku, launched at Araluen on the weekend. They are the result of relationship and collaboration, in some instances over many years, between traditional owners and visitor scientists, artists  and writers, looking at meeting points and divergences in the ways of knowing that country. 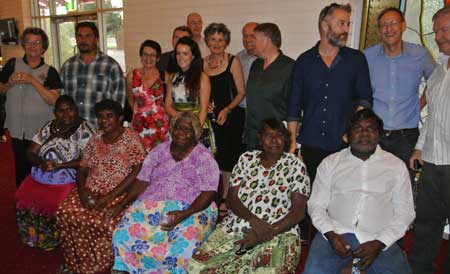 Both exhibition and book bring together a rich and eclectic range of materials: painted large-scale maps; history paintings by Walmajarri  artists; a set of screenprints, most of them collaborative, layering in the Walmajarri’s and visitors’ work; landscape painting, including by reputed artist Mandy Martin; photographs; a DVD; found object sculptures, as well as written accounts.

At right: Some of the Desert Lake team at Araluen last Friday for the exhibition and book launch. Among them, Hanson Pye, seated far right; Steve Morton behind him in pale blue shirt; Shirley Yoomarie, seated second left; Veronica Lulu, next to her; Mandy Martin in the centre in black; Kim Mahood in red floral print; Faye Alexander far left; David Taylor, far right.

As you enter the exhibition (and open the book) beautiful aerial photographs reveal the large body of water in the desert that is Paruku and that until now for me was a remote spot on the map shown as ‘Lake Gregory (salt)’ way out where the Tanami Desert merges into the Great Sandy Desert in northern WA. An immediate benefit of Desert Lake is to put flesh on the bones of this vague and inadequate impression. The impact of coming upon a lake in the desert is evoked over and again in the book: it is “matchless”, write ecologists Steve Morton and Tanya Vernes: “Every traveller who is privileged to arrive at the shore of the Lake after a day of thirsty travel across hundreds of kilometres of sand-plain is presented with an unforgettable impression of plenitude.”  Apart from the people it has nurtured from time immemorial, it supports an abundance of life, including 73 waterbird species, 21 of them breeding at the lake. 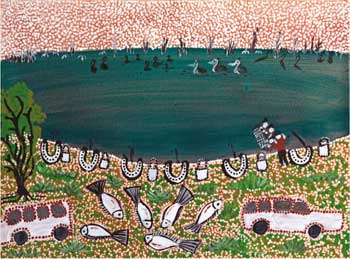 You learn that the lake is mostly freshwater, fed by Sturt Creek from the north, and has dried only twice since 1971, although it was generally dry between 1930 and 1968. The Walmajarri believe the lake has filled since its return to them: two pastoral leases over the area were bought for them by the Aboriginal Development Commission in 1978, with families moving back to Mulan community the following year. In 2001 much the same area of land was declared an Indigenous Protected Area after the Walmajarri’s native title was recognised.

Most of the work in the exhibition and book has been undertaken since the declaration of the IPA but the unearthing of the flaked cobble stone was the culmination of a much longer-standing relationship between the Walmajarri and geologist Jim Bowler. In the 1970s he had discovered the Mungo Man and Woman burial records in the Willandra lakes of western NSW, a discovery which expanded the evidence for human occupation of the Australian continent from 20,000 years to about 41,000 years. His search for an equivalent site in northern Australia brought him into the Paruku area in 1978.

His account of his work and relationship with the Walmajarri as well as the connections between their different ways of understanding country is fascinating. For instance, he was particularly interested in the landscape feature, peculiarly Australian, known as lunettes, crescent-shaped shoreline dunes. In negotiating with the Walmajarri about his access to their land, he learned that they accorded sacred significance to the lunette on the north-western side of the main lake at Paruku. “I was astounded to be faced with an example of continuity connecting ancient people, culture and sacred lunette sites of 40,000 years ago at Mungo, with modern people and a living tradition on a lake 2000 kilometres away at Mulan.”

This gives you something of an idea of the time span that Desert Lake deals with, which can remain obscure to many of us even though it is what traditional Aboriginal stories constantly evoke. There are many explorations of this “deep time” in the exhibition and book. The Falling Star song is the Walmajarri creation story for the lake: the star rose in the east (at Mount Doreen), fell into the lake and was changed into a man, the ancestral hero Kiki. A number of versions are presented as texts in the book; with permission the landscape painter Mandy Martin took the story as a theme for her work there.

Traditional owner Hanson Pye is the present-day senior custodian of the story. His interactions with the strands of the project led him to conceptualise in paint the Walmajarri world view. Called Parnkupirti Layers, it refers concurrently to the layered revelations of the excavation site on the banks of the Parnkupiti Creek (feeding the lake from the east) and their confirmation of the Waljirri, the foundation of Walmajarri life in the area. The dark bottom layer of the painting is “where my ancestors been sitting … making tools, spearheads, camping, they been singing corroboree.”  The lighter upper layer is “the whole area where we’re living now” in the kuwarri (present day). The two are inseparable, “the same”. “Got that?” he asks.

In the present day but with its roots in an earlier, though still recent era is the relationship between the people at Mulan and kartiya (whitefella) artist and writer Kim Mahood. She grew up on a cattle station east of Mulan and many locals of an older generation were employed by her family doing stockwork. She wrote about this time and relationship in her prize-winning memoir Craft for a Dry Lake, published in 2000. In 2004 she was invited to work with the Mulan women to help set up a women’s centre. Out of this grew the map-making project that forms another strand of the Desert Lake undertaking. The project is on-going as part of Mahood’s work for the Paruku IPA. 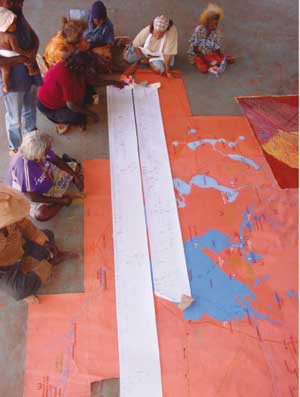 The maps have been part of her learning to read the “subtle and complex” language of Paruku, “one of the great adventures of my life”. For the Walmajarri they have been a way to articulate and pull together their knowledge of country, going hand in hand with their story-telling.  “They understood the value of the maps as documents that spoke clearly to white people,” writes Mahood, while it was also clear that they invested the maps “with meanings outside my understanding”.

Some of the map-making has involved new realisations, such as the increased pressure on parts of the country from the traditional practice of lighting it up to “clean” it, as they see it. A huge fire map on display in the exhibition shows the areas burnt in recent years with colour-coded dotting. In a special area on the shores of the lake that is off limits to most visitors layers of different coloured dots lie on top of one another, suggesting that there may be an environmental impact to consider.

At right: Walmajarri discussing cultural map with genealogies, 2008. Photo by Wade Freeman, p 49 in the book.

Other environmental threats include an infestation of fish by worms and a large population of wild horses. The Desert Lake project has deepened the conversation about these issues; how to manage them is part of the challenge facing Paruku and its Walmajarri custodians.

As an exhibition Desert Lake pulls in different directions or perhaps, more in keeping with its intentions, reveals layers of approach to a very special part of the world. My initial experience, aided by dipping into the book, has been absorbed by its documentary layers. A return visit will be necessary to appreciate its artistic achievements.

The exhibition is showing at Araluen until Sunday 14 April. The book, published by the CSIRO, is available there for sale.