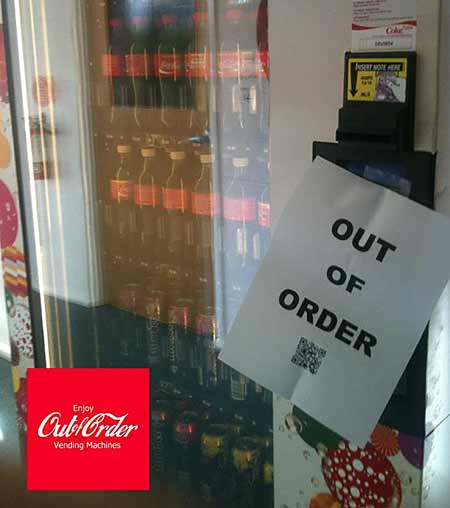 The Northern Territory Government will ask the beverage industry to voluntarily continue the container deposit scheme following today’s Federal Court of Australia ruling that it is illegal, says NT Chief Minister Terry Mills (at left).
Meanwhile a group calling itself Out Of Order has begun sticking OUT OF ORDER notices on Coca Cola and Mount Franklin vending machines around the country “in support of the Northern Territory’s ‘cash for cans’ scheme,” says spokesman Katso.
“We are committed to keep disabling the machines until Coca Cola Amatil withdraws the legal action.
“Many notices have remained on machines for the three days since we started. We aim to directly affect Coke’s bottom line through this action but also by encouraging people who are disgusted by this move to boycott Coke products.”
He says dozens of stickers have gone up in most capital cities and there is interest in France and the USA in supporting the initiative.
Mr Mills says: “I will be seeking, at the very least, a continuation of the scheme for two months so that Territorians who have collected containers can have them redeemed.”
He says he is putting the industry on notice that the Government will be vigorously pursuing every avenue to ensure Territorians’ rights are not trampled on by big business.
The Federal Court of Australia today ruled the Container Deposit Legislation (CDL) is illegal under the Commonwealth Mutual Recognition Act.
“We will still seek an exemption under the Act for CDL and have gained support from all States and the ACT to do this through the COAG process,” Mr Mills said.
“The Territory Solicitor General will advise the Government as to whether there are proper grounds for an appeal, and if there are, then we will go down that path.
“If the scheme is brought to a halt, I expect that the price of goods affected by the decision to fall substantially, reflecting the previous price increases,” Mr Mills said.
“I will be briefing the Commissioner for Consumer Affairs to oversee this process.
“The packaging industry has always maintained that it can provide an effective alternative to our CDL scheme, now is the time to prove it by offering effective alternatives while approval is sought through COAG.
“I want to make it very clear that the Government is looking at ways to minimise the economic effect of this decision on those Territorian businesses which, in good faith, invested substantially in the recycling scheme.
“The Department of Business will work with these operators as we go through these latest changes.
“We have fought every inch of the way to keep a Container Scheme in the Northern Territory and I am disappointed by the Court’s decision.”

Alice Springs Town Council has today suspended the Council’s Cash for Wine & Spirit Glass Bottles scheme, due to yesterday’s Federal Court ruling on the Territory Government’s Container Deposit Legislation.
Mayor Damien Ryan said: “I’m very disappointed that Council has had to take this action.
“Both the previous Council schemes and the Territory Government scheme have had enormous community support here in Alice Springs, so this decision comes as a massive blow to both the community and our environment.
“The sooner an Australian wide Container Deposit Legislation is implemented, the better off all communities and our environment will be.” Said Mayor Ryan.
The Council’s scheme has been operating out of Territory Metals since October 2012.

The Arid Lands Environment Centre says the Cash For Containers scheme has proved popular with consumers with over 35 million containers returned in 2012.
Coca-Cola Amatil, Schweppes Australia and Lion Pty Ltd have been accused of bullying tactics and of actively lobbying against the scheme since its introduction by the Labor Government in January last year, says ALEC’s Jimmy Cocking.
“The Northern Territory is coming under national focus from this decision. We are receiving calls and emails from people interstate who have heard about it and are as outraged as we are. They want to know what they can do to help.”
The NT Container Scheme should be exempt from the Federal Mutual Recognition Act until a national container deposit scheme is legislated.

“There was a system in place that worked and the AFGC on behalf of their corporate container clients had lobbied to have this scheme removed, and now they further insult us with a token offer announced yesterday.

“I’m eager to work with anyone who wants to improve recycling rates in Alice Springs but this has to be a serious discussion around tangible benefits and outcomes, not tokenistic offers.

“I encourage the NT Government to take a strong stand on reinstating Container Deposit Legislation at next months Commonwealth Heads of Government meeting.” – MEDIA RELEASE.