"In which state is Alice Springs," asks 000 operator as armed thugs threaten to kill

“In which state is Alice Springs?”
No, this wasn’t the irritating question by a cold caller from New Delhi.
It was what Matt Roberts was asked by the woman responding to his 000 call while he was under siege, for nearly an hour, from a gang of armed, rampaging youths.
Police have since apologised to him for this outrageous incident, says the tennis club coach and manager, but it remains unclear how it could still have happened after years of public complaints about police response to calls for help.
For Mr Roberts it was part of 46 minutes of terror last Friday night.
He had returned to his home in the tennis club precinct in Traeger Avenue after Jake, aged 15, whose guardian Mr Matthews is, asked him to come home.
A number of gang members had broken into the complex. With the gates closed for the night, the intruding youths climbed over the fence and a fight ensured. Jake had the upper hand.
More gang members arrived and proceeded to smash windows and furniture in the clubhouse.
By the time Mr Roberts returned home after 9pm, the number of attackers had grown to nearly 20, now armed with tree branches, timbers, broken bottles and knives.
Mr Roberts, for their safety, ushered Jake and two young guests into a room of the house and was now guarding, on his own, the back door which was smashed in.
He made two phone calls to 000. He was kept on hold for eight minutes the first time and 17 minutes the second, all the while being told to be patient.
It was the second operator who clearly had never heard of Alice Springs, let alone the location of the tennis courts, now the subject of Mr Roberts’ exhaustive explanation, whilst making a lone stand against the mob which, in foul language, threatened to kill him. 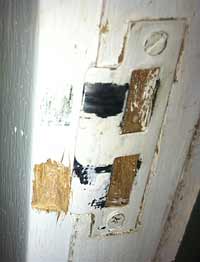 The situation was defused by the arrival of the mother of one gang member.
At the beginning she too was aggressive, but when she recognised Mr Roberts as the club’s manager, and remembered he had arranged a special clinic for one of her children with tennis star Evonne Goolagong Cawley, she told the rioting youths to beat it – and they did.
Three minutes later the police arrived.
PHOTOS: A piece of timber used as a weapon in the assault, and the smashed back door of Mr Roberts’ home.