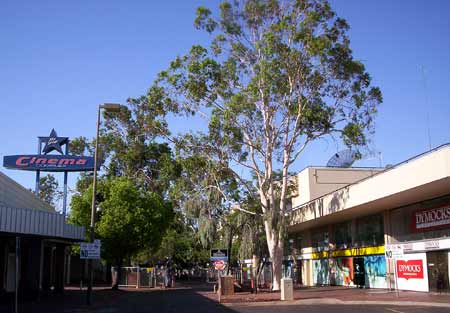 These photos may end up being some of the last images of the trees and the sails that have been a part of this end of town for the last quarter century.
It used to be the case that milestones of the Todd Mall’s official opening in 1987 were celebrated – the first anniversary, the fifth, tenth, and twentieth (from memory).
Last year the 25th anniversary passed by with nary a mention; by this time the decision had been taken to dismantle the north end of the mall.
There are several ironies connected with last year’s decision to proceed with the demolition of the mall’s north end and re-open the route to traffic.
First, former mayor Leslie Oldfield (Huggins) passed away earlier in the year – she was the mayor who officiated at the formal opening of Todd Mall in 1987.
The construction of the mall was a project of the Alice Springs Town Council, but funded by the (then) CLP NT Government.
The Deputy Chief Minister, Ray Hanrahan (the Alice’s first, he was the local Member for Flynn), accompanied Leslie Oldfield at the official opening of Todd Mall. Hanrahan was a former alderman of the Alice town 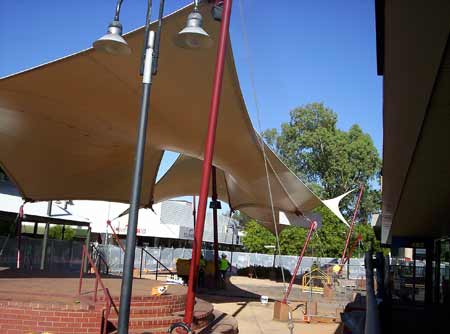 council in the early 1980s.
Last year the NT Government (again CLP) agreed to provide the finance for the Alice Springs Town Council’s project to demolish the north end of Todd Mall.
Once again the Deputy Chief Minister – and again from the Alice – was a key figure in this process: Robyn Lambley, who is also a former town council alderman.
Her electorate of Araluen today is almost identical to the boundaries of the former electorate of Flynn in the 1980s, once held by Hanrahan.
So now we witness the expenditure of millions of taxpayers’ dollars to re-open the north end of Todd Mall to traffic, following the expenditure over the years of millions of taxpayers’ dollars to build the mall, and millions more for upgrades and a partial re-opening of the north end of the mall into a traffic cul-de-sac. 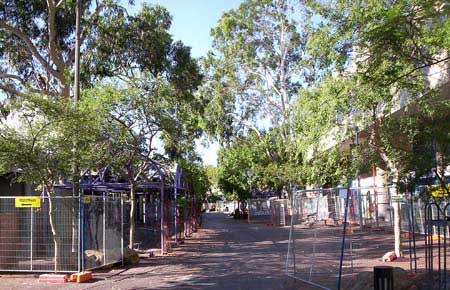 And on every occasion we were assured by the “experts” that these decisions were the wisest use of public moneys and will work for the public’s benefit.
The history of the Todd Mall in Alice Springs continues to be a perfect analogy of the operation and interaction of business, bureaucracy and government in the Northern Territory.

Move mower up a notch to reduce grass sunburn

By GEOFF MIERS Christmas is for kicking back and relaxing but not when good rains provide ideal growing conditions: Close that book, switch off Netflix...
Read more
Issue 52