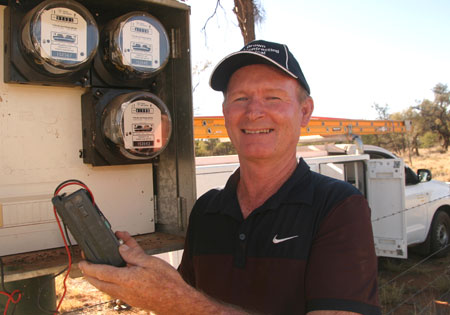 Councillor Steve Brown (pictured), who is an electrician, fell seven metres while working on a power pole on Saturday.
He suffered extensive bruising and a broken bone in his foot, but comprehensive tests in the Alice Springs hospital revealed no serious injuries.
Cr Brown says he was last week exonerated by the council, meeting behind closed doors, over remarks he made about Alice Water Smart, a local group formulating rules about water use.
Cr Brown says he would have preferred the discussion had taken place in open council, and Cr Eli Melky also moved for the matter to be dealt with in “open”.
However, a majority of councillors voted against that.
Cr Brown says the decision was that he had not breached council rules, and maintained he would not be restricted in the expression of views.
“My job is to represent the people who elected me,” says Cr Brown.
The council resolution says: “The language, however robust, of Cr Brown  was directed at a political or philosophical position, rather than a particular member of the public. No breach of the rules of conduct had taken place.” – ERWIN CHLANDA