A formal complaint has been lodged with the Town Council about the conduct of Councillor Steve Brown.

The complaint comes from Jimmy Cocking, coordinator of the Arid Lands Environment Centre (ALEC) and it’s about the letter to the editor written by Steve Brown and posted on this site on Tuesday morning.

Cr Brown signed the letter only as “Steve Brown” but he does not stipulate that the views are personal and they very much concern issues that are before council – the adoption of “community water rules” being pushed for by Alice Water Smart. Further, the Town Council is an Alice Water Smart consortium partner and has an elected member (Eli Melky) on its Citizens Advisory Panel in relation to the “water rules”.

Cr Brown accuses Water Smart of having a “blow-in Enviro-Nazi mentality” and, in a follow-up comment, describes its personnel as “Loopy Left Environmentalists”.

Mr Cocking (pictured above during a protest against the nuclear waste dump) says the letter breaches clause 5.4 of council’s Code of Conduct for Members which requires of them that they “treat members of the public fairly and equitably and with respect, courtesy, compassion and sensitivity”.

He says Cr Brown’s language is “offensive to us, our organisation, environmentalists generally and to the families of people around the world who suffered at the hands of the Nazis”. He says it is simply not acceptable for an elected representative to behave in the way Cr Brown does and that he needs to temper his approach.

Cr Brown, however, stands by his choice of words. He says the term “Enviro-Nazi” is in common usage and he has not applied it to any one individual: “If an individual recognises themselves behind the term then that’s their problem.”

The code of conduct provides penalties for breaches.  They include the possibility of a censure motion being passed by council; council requesting that the member make an apology; or council reprimanding the member who may be counselled.

Cr Brown says council might ask but he would not be apologising. And if council instructs him to? “I’ll take no bloody notice,” says Cr Brown. “I won’t be constrained in my language.”

Mr Cocking says Cr Brown’s letter is also in breach of council’s agreement with Alice Water Smart as a consortium partner: “You can’t go out in public slamming one of the other program partners. The whole spirit of the agreement is that we respect each other.” 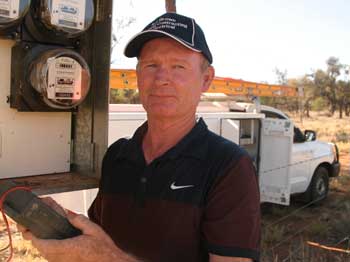 To this Cr Brown (at right) says that he is a councillor, “not part of council”. He was elected to put people’s point of view to council: “I’m not subject to its rules and conditions.”

What about the code of conduct? The News read to him clause 5.4 (as quoted above). Cr Brown says he does treat members of the public with courtesy, and reiterated that his comment was about a particular mentality, not about individuals.

Mr Cocking says Cr Brown’s behaviour is especially of concern given that he is chair of the council’s Environment Advisory Committee: “It’s very hard for that committee to have credibility when its chair sees people who are concerned about the environment as ‘Enviro-Nazis’.”

Cr Brown rejects this: “I’m just sick of the holier-than-thou smart-assess who give all environmentalists a bad name. I’m an environmentalist, of the common sense kind.”

Mr Cocking says Cr Brown has also demonstrated “disconnection” with his responsibilities by failing to attend, or provide an apology to, the October meeting of the Alice Springs Water Advisory Committee, convened by the NT Government, and on which he is the council representative.

Cr Brown is again unapologetic. He says he can’t attend every meeting nor apologise for every absence. Things come up at the last minute, especially as he’s a working electrician.

The controversy comes in the wake of council adopting on Monday a “usage” policy relating to media, including social media, which imposes similar constraints on elected members. It generally calls on them to exercise “sound judgment and professionalism” and stipulates that those using social media “must … be polite and respectful to all people with whom they interact” and “must not post material that is offensive”.

The vote was split five to four. The dissenting four were Councillors Brown, Eli Melky, Geoff Booth and Dave Douglas. Cr Brown’s objections were mainly focussed on this paragraph: “Views expressed by elected members should be clearly identified as their own, either personal or professional. Comments should be in line with relevant Council policies and not at any time bring the reputation of Council into disrepute.”

During debate Cr Brown agreed that once elected members reach a decision they should back it up and that they should not bring council into disrepute but he didn’t like at all the idea of “wording that sits on our shoulders and every time we go to write a letter to the paper or make a comment that we have to think whether it complies”.

He said that it may often be the duty of an elected member to disagree with council and not to necessarily follow council’s guidelines. “Our role is to represent a point of view of ratepayers to council. Any wording that places restrictions on our ability to do that is anti-democratic and I will not support it”.

It so happened that Cr Brown had his letter to the editor ready to fire off, and has thus provided an early test of the policy and the “disciplinary action” it warns of.

Meanwhile, he says he will be working to overturn the media usage policy which is a “direct threat to freedom of speech”.

Town Council CEO Rex Mooney has said he will respond to questions from the Alice Springs News Online “as soon as I am in a position to do so”.