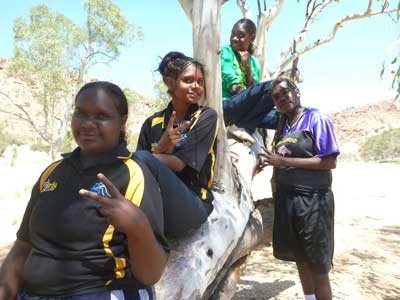 It’s fun, moving, full of optimism and high energy: a video clip made by Year 11 Indigenous students at Centralian College in Alice Springs has won a national competition, earning $15,000 for their school.

At left: Among the students involved in the clip are (from front) Ashley, Lavina, Lemona and Shania.

As with all the high schools in the CREATivE CHANGE competition, they based their entry on the Warumpi Band’s Blackfella/Whitefella, researching the issues with their teacher Marylyn Pett and going on to develop an original rap, using Garage Band to create their own backing track. The lyrics are simple but meaningful:

“We’re singing together / we’re making life better … are you ready with a helping hand? / When the camera is gone … will you still be there for your fellow man? … We are all one mob / we all need an education / we all need a job / across this great nation … Healthy eating /  healthy living / healthy family / healthy future … make the right choices / … Shout it: Indigenous / Australian / dancing / creative…”

They mostly film themselves, rapping and dancing in all sorts of locations around the school and town, including in bushland, giving the clip a great feel of the place they live in. As the backdrop to the famous Warumpi chorus of “Stand up, stand up and be counted”, they turn their camera outwards, to non-Indigenous people around the town, business people, children, who do indeed ‘stand up’. “Can we count on you? / Can we count you in?” they ask and here you see the college student body packing out their theatrette, all jumping to their feet. It works – you feel like cheering.

The competition is organised by a group known as “GenerationOne” in collaboration with the Australian School of Performing Arts. GenerationOne is “a movement to bring all Australians together to end the disparity between Indigenous and non-Indigenous Australians in one generation”. As the Centralian College students say (filming at Heavitree Gap), “Whitefeller, backfeller, let’s close the gap / Make it one genation across the map.”

The competition was judged by actor Jack Thompson and singer-songwriter Casey Donovan together with GenerationOne spokesperson Jeremy Donovan. Entries came from 176 schools. Primary schools were asked to to perform and film their own version of the GenerationOne theme song Hands Across Australia. Yandeyarra Remote Community School (WA) won the primary school section. The People’s Choice went to to Tallowood School (NSW).