Outlook for the Alice: a mixed bag 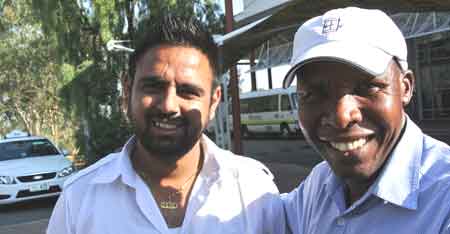 Visitors who have boned up on Central Australia are likely to expect workers with black faces at the airport, but will they be Indigenous? None of these four is: Taxi drivers Harpreet Singh and Bruce Mahiangu come from India and Zimbabwe respectively. Security guard Gladys is from South Sudan but now – when asked where she’s from – proudly says “Australia”. Her colleague Sam  comes from Liberia. The number of India born people now in the NT rose from 588 to 2000 between 2006 to 2011. Alice Springs’ cosmopolitan character has been enhanced by an injection of nearly 2,000 overseas migrants who arrived in Australia between 2006 and 2011. They’ve found The Alice to be a great place to get a job, a forum was told this week.

The population of Alice Springs, after a slow growth between 2001 and 2009, is now declining.
Old people are leaving. The proportion of working age people is on the way up.
There are gains in education. Many people from overseas are now working here.
Small bush communities (of fewer than 200 people) seem doomed and the uncertain prognosis for our region is to have a non-Indigenous population of just under 30,000 and an Indigenous one of 20,000 by 2025. It’s a mixed bag.
“The anticipated growth rates are low to moderate when compared to say Darwin and the rest of Australia as a whole. Nevertheless, things can change rapidly and substantially,” says Andrew Taylor (pictured), of The Northern Institute.
He was presenting a statistical snapshot to assist Charles Darwin University with its plans for Central Australia, gauging “the potential local market for higher education now and into the future in terms of size, higher education readiness and composition”.

Dr Taylor says Alice now has a population of 28,500 with a median age of 33 and 19% of us are Indigenous.
The two shires surrounding us, massive in size, Central Desert and MacDonnell, have just 11,000 people – a lot younger than us, median age 27, and 77% are Indigenous.
The town and the two shires make up the region described by Dr Taylor.
The town grew by just 7% between 2001 and 2011, from 26,529 to 28,500, with a peak in 2010 and a slight drop in the following year.
By comparison, the fastest growing NT shire is Palmerston – a 33% increase for the same period. The NT average is 17%.
Dr Taylor told a forum in Alice Springs this week: “Essentially since 2009 the population of Alice has been estimated to be stagnant or falling … due to high net out migration to other states and territories which we essentially put down in part to a hiatus in major construction projects.”
The town’s shifting demographic is influenced by “the growth, albeit from a small base, in the Indigenous population aged 40 and over,” says Dr Taylor.
“I must say this surprised me a little, given all the talk about young males drifting into town as a result of the intervention.
“But younger ages have actually declined in real terms. Collectively the 40+ Indigenous population makes up 30% of all Indigenous residents now, up from 25% in 2006.
“This is consistent with our past research which has shown that older Indigenous people, and women in particular, make up a lot of the urbanising cohort in the Territory.”
We are part of the urbanisation ‘megatrend’
Urbanisation of our region is on the way up: “It is in Australia and globally is what I’d term a megatrend.
“A megatrend is a development which is overarching and impactful economically, socially and politically. They are so powerful that they transform societies at all levels and are generally outside the influence of policy makers.”
Says Dr Taylor: “Growth in and around Australia’s capital cities dominates our collective picture of national growth. This was certainly the case in the Territory with Greater Darwin and surrounds growing at twice the rate (21%) of the rest of the NT (12%) from 2001 to 2011.
“In fact, around three quarters of the Territory’s population growth during the past decade has been in the Greater Darwin area. Even within the Alice Springs region, an increasing share, now 72%, of the population is residing in town.
Fewer people are choosing to live in remote settlements.
“Large communities are continuing to trend upwards, medium fluctuating somewhat and small actually increasing slightly.
“But the biggest story is the significant reduction over time of people choosing to live in settlements of less than 200 residents.
“This is a delicate issue because these include the outstations or homelands which are seen as archetypal in the relationship between land and the wellbeing of Indigenous Territorians.
“Likewise, the long term trend is towards the urban centres of Darwin and our other towns.
New migrant communities
Says Dr Taylor: “There has been large growth in the non-Indigenous working age residents. Much of this is the effects of the in migration of new migrant communities.
“A portion is likely to be workers associated with expanded government services and programs, and at least some with the NTER. 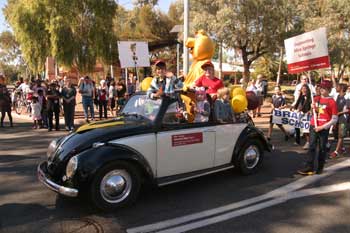 “Nevertheless, the reduction in 5-20 year old non-Indigenous people is curious. We might take the negative view on this and speculate that some of those who moved into Alice chose not to bring their kids and instead send them to schools elsewhere, or we might take a more positive view and suggest many come as singles or young couples and may be about to have children, especially those aged in their mid to late 20s.”
(At right: Some do choose to stay! Children marching in the Bangtail Muster 2012.)
One thing that characterises the demography of the Northern Territory are our very high population turnover or “churn rates”.
“It has long been a hallmark. Darwin, for example, has around 100% turnover as a proportion of the resident population each five years.
“Alice region is not quite as high but nevertheless significant.
“There were more movers out than in and particularly for young females in their early career ages.
“This is a double whammy for the future because not only do we lose their economic contribution and social capital but also their potential contribution to population growth through births.”
Churn rate a challenge for higher education
There was a churn of around 2,500 with other areas in the Territory, around 9000 with other states and 2300 inbound from overseas, but an unknown quantity outbound to overseas because they of course don’t complete the Census.
“The turnover as a proportion of the 2011 resident population is high by any standard and once again signifies a challenge for attracting and retaining both staff and students for higher education.”
The net effect of interstate in and out migration to the region over the five years was around minus 1,100. Retirees are leaving in relatively large numbers and there is a large outflow of females aged 30-39 years. In the five years prior there was a large inflow of females aged in their 20s.
“While we can’t tell whether it’s the same people it is very likely to be some of (if you like) 2006 intake who are now leaving.
“The other disconcerting thing is that we are failing to retain retirees and grandparents in the region which means that young families are faced with the decision on whether to stay or move closer to the family once they have children.
“The departure of so many women in their 30s suggests this influence is at play and we know from other data for the Territory that there is a substantial baby effect on out migration from the Territory. Again, this is nothing unusual for remote places.
“Counter balancing this, the net inflow of people in their early career ages, should they stay for the long haul, offers future birthing potential and future dividends for the workforce and general social capital.”
Good improvement in secondary education
There is good news in education, a large improvement in the number of residents who have achieved Year 11 or Year 12.
Outside of town there was a dramatic increase in those completing Years 9 and 10.
“What we would obviously like to see in 2016 when the next Census is undertaken is the progression of the new achievers for Years 9 and 10 to Years 11 and 12 in the remainder of the region,” says Dr Taylor.
“Again we see some good progress with strong growth in town in the proportion with a Bachelor degree or above and some growth in the remainder of the region.
“This is reflected in good overall growth in the proportion of those 15 and over who have a post-school qualification. Of those in town with a Certificate, 96% were at Certificate level III or IV.”
Projections point to an ageing of the population in the region over the medium to long term but projections at these fine grained levels of geography and by age are perhaps indicative at best. 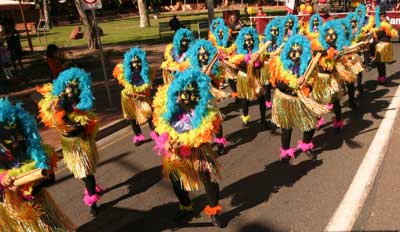 The town’s cosmopolitan character has been enhanced by an injection of nearly 2,000 overseas migrants to Alice Springs town who had arrived in Australia during 2006 to 2011.
Overseas born 20% of town population
This boosted the overseas born population to 20% of the town, about the same as the proportion who were Indigenous residents.
It grew the size of the proportion that was born overseas by 30% between 2006 and 2011 and without the new arrivers in the past five years the population of Alice Springs would have fallen by around 5%.
There are nevertheless very few overseas born people in the bush – it’s a town based phenomenon.
Driving the recent inflow are four emergent or new migrant communities which are growing rapidly. While traditional sources like the UK and USA are still the largest, they are declining relatively and in the meantime new communities, especially India, the Philippines (like members of the Mabuhay Multicultural Association pictured above), Zimbabwe and New Zealand are growing rapidly.
Combined, these new migrant communities are now larger than the most prominent source for overseas born – the UK.
Says Dr Taylor: “Job opportunities appear to be a major factor in drawing these new migrant communities to Alice.
“For females, full time work in the health care and social assistance industry is prominent. This industry includes hospitals; medical and other health care services; residential care services; and social assistance services.
“This industry is dominated by females across the country and in the sorts of ratios we see here. Male employment is more widely distributed across industries with public administration and safety and health care prominent.”
As we know, on any given day there are a number of non-resident workers in the region on short-term contracts or associated with specific projects.
Going on 2006 figures, non-resident workers have a slight male bias, are relatively old and, as shown in the new migrant communities, many are working in the Health and Community Services sector.

Facebook
Twitter
Pinterest
WhatsApp
Previous articleIs the Town Council getting ready to relinquish its role as trustee of the Todd River?
Next articleAlice professor on Desert Knowledge CRC blacklist?