The Great Alcohol Debate: Still waiting for the detail

Action on alcohol by the new Territory Government is still lacking detail, despite all the attention the issue got in the Legislative Assembly.

Attorney-General and Minister for Justice John Elferink, making a Ministerial Statement on Alcohol and Crime on October 31, lauded former Chief Minister Marshall Perron’s  Living with Alcohol program:  “Risks were taken, innovation given a chance and home-made programs were promoted.” Not all of them flourished though because “clear analysis of the outcome allowed for a rigorous assessment and many programs were stopped on these criteria”.

Reading Hansard you can’t see whether he blushed when he went on to criticise the former government for not taking “a leaf from this book”. He argued the case for his own “rigorous assessment” of the Banned Drinkers Register “experiment”, amounting to his interpretation of Protective Custody and crime statistics (others have been offered, for instance on this site), while side-lining the observations made in the community about the consequences of scrapping it immediately the Country Liberals came into government.

He sees “sections of the media”  and “a number of Territorians” as Labor’s dupes for reporting observations about drunks since returning to the streets. Such observations don’t amount to ‘rigorous assessment’ either but when they come from such quarters as the Alice Springs Town Council – not a body known for rocking the boat – they deserve to be taken seriously.

Mr Elferink said arguments that the register should have been continued until the government’s policies were in place  are “misguided”: “Under normal circumstances such a transition may well have been considered, but these are not normal circumstances. We have a budget which has been vandalised by the previous government, a pressing and urgent need to restore our finances by concentrating on core business and abandoning wasteful, extravagant or ill-conceived programs.”

Meanwhile, his government’s undeniably expensive compulsory rehabilitation programs have been the subject of “a substantial amount of work”: “I can advise we are in a position to make a more fulsome statement to this House in the future,” Mr Elferink concluded. 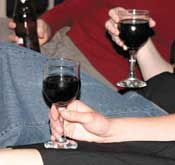 It wasn’t hard then for Labor’s Shadow Minister for Alcohol Policy Michael Gunner to criticse the statement for lack of detail: “So they went to the election with this policy. We are now several months past that election date and we are still not yet ready to see the detail of how, how the CLP are going to criminalise drunkenness, and that is the real debate.”

He also wanted to know what the Alcohol Policy Minister (Dave Tollner) does: “The Attorney-General is responsible for the habitual drunks legislation, the Chief Minister scrapped the Banned Drinker Register, the Treasurer is negotiating alcohol reforms in Alice, and the Business Minister does licensing.”

And he tackled Mr Elferink on his dismissal of people’s personal experience of the dismantling of the BDR: “The member for Port Darwin cannot criticise [them] because apparently the entire CLP policy around criminalising drunkenness is based on the member for Port Darwin’s personal experiences as a general duties police officer … When asked on the 7:30 Report NT if there was any industry evidence or scientific evidence that supported the CLP policy he said, ‘no, it is essentially something we are doing from the ground up’. They made it up,” said Mr Gunner.

The last speaker in this debate, Deputy Chief Minister and Minister for Central Australia Robyn Lambley, also put her faith in anecdote, protesting against “all these alcohol restrictions and reforms imposed on us by the Labor Darwin-centric government”.

“… the people in Darwin were making decisions about when we could buy alcohol, how much we could buy, what products we could buy, and who could buy it. At one stage we were telling the retailers where we would drink it. It was bordering on the ridiculous and some of those things were rolled back by the former government …

“Alice Springs people – and I will talk for my own community – most people did not like it. … Over the years, very little has had any effect on alcohol consumption. We know that because of alcohol-related crime and alcohol-related social problems. Nothing has really improved. … Anecdotally, and from most people’s perception in Alice Springs, nothing really improved or changed apart from the variety of alcohol reforms and restrictions that were put in place by the government.”

Nonetheless, Ms Lambley reiterated that, as future lead architect of alcohol policy in Alice Springs, she will be taking “a balanced approach”.

“It will be looking at supply reduction and also trying to reduce the demand for alcohol in the community. That was reinforced by my colleagues. We all took a step back after hearing some of the wonderful insights of the people present [at the October 5 stakeholder forum on alcohol issues in Alice] and we felt that you cannot just direct all your energies into trying to curtail or limit supply; that you really do have to look at it from both angles and look at trying to reduce demand.”

‘Proof that the BDR did not work’

The answers to our grog problem will be a home brew, says Lambley