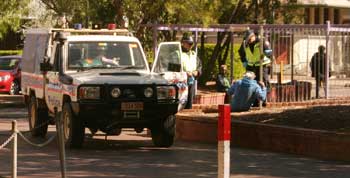 Protective custody statistics shown in the Police Annual Report, tabled in the Legislative Assembly yesterday, show a considerable drop in police protective custodies over the last six years, with a big hike in the middle period followed by a big drop in 2010-11 (see graph below).

This puts a different complexion on the recent mileage made by NT Attorney-General John Elferink of the small drop in police PCs between 2010-11 and 2011-12. A small drop building on a big drop is a better look for where alcohol policy was heading than just a small drop on its own. Mr Elferink interpreted the small drop as evidence of the failure of the Banned Drinkers Register, rolled out across 2011-12.

The Alice Springs News Online asked for more detailed statistics, specific to Alice Springs. We repeated our request this week but to date we have had no reply (sounds familiar – same spots on this different leopard).

In 2011-12 there is an unusually high number of people in the Indigenous status unknown category, due to a changing in recording practices. All up these cases accounted for 1214 police PCs, 683 of them female.

The police PC stats however – as pointed out in the report –  do not give a full picture as they don’t include people taken to sobering up shelters, taken home or left in the care of a responsible person.

Below: The graph illustrates the sustained drop in police Protective Custodies, NT-wide. One factor that may have contributed to the big drop in 2010-11, as pointed out by Bob Durnan in the comment below, is the ban on cheap wine in large casks (4 and 5 litres). This was made NT-wide effective from January 1, 2011, bringing Darwin and Palmerston into line with the other major urban centres and most towns of the NT where the ban already existed. The Licensing Commission noted in its decision, that prior to the ban, “the Darwin / Palmerston areas were defying the downward trend with alcohol sales and consumption increasing, while a decline was being experienced in the rest of the Territory”.