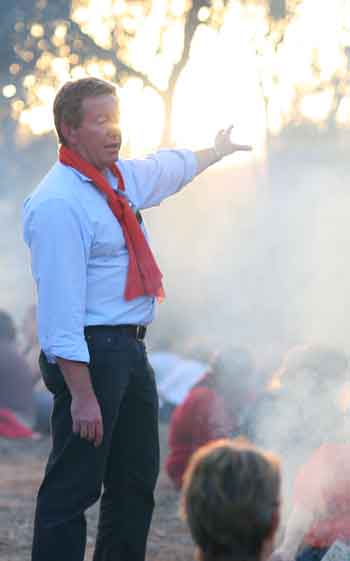 The coming summer will be a busy time for tourism managers in Alice Springs, says Tourism Central Australia (TCA) chairman Jeff Huyben.
Visitor numbers – as usual at that time – will be small but the government’s Tourism NT (TNT), the statutory body promoting the industry with a budget of more than $40m, will be setting up its headquarters here, moving from Darwin.

“I’m looking forward to the changes,” says Mr Huyben.
“They are bound to be beneficial to the region” while not losing sight of the needs elsewhere in the Territory.
Although a number of positions in the organisation are yet to be filled, the local lobby will be keen to strike up close relationships with the TNT, says Mr Huyben.
Tourism in the region has been in a prolonged slump, visitor numbers dropping by around 50% in the past 10 years.
The contract of TNT CEO John Fitzgerald (at right) is expiring in December and Tony Mayell (at left), who was in Central Australia in a number of positions, government and private, will return to take the job.
A spokeswoman for TNT says Mr Fitzgerald, who was appointed in February last year, is “in discussion” with the new government about any position for him.
A spokeswoman for Chief Minister Terry Mills says the government is “looking for a position” for Mr Fitzgerald.
The government has further defined the role of the new Tourist Commission, headed by Darwin identity Michael Bridge.
Mr Mills’ spokeswoman says it will have “more teeth than an advisory body,” can approve programs and can set policy directions for Tourism NT. The minister has ultimate discretion.
Meanwhile Mr Huyben says TCA is looking for a new general manager.
It is refurbishing its visitor’s centre by adding more information about the West MacDonnell national park.
It is also having a mobile information office built – a trailer that can be taken to major events such as the Masters Games, the Finke Desert Race and the big Road Transport Hall of Fame functions.
And it is devising a strategy for developing facilities for bicycle riders around the region, including King’s Canyon, says Mr Huyben.

Chairman of new tourist commission on hunt for experts to fix industry.
Centre on the outer in visitor trade with China, but commission head says Tourism NT ‘will make every effort’ to fix problem.
After years of under-achieving, tourism promoters say they are getting cracking.

Facebook
Twitter
Pinterest
WhatsApp
Previous articleTrying to get the numbers right: rents in remote areas
Next article'Proof that the BDR did not work' – Attorney-General releases protective custody stats

By ERWIN CHLANDA A councillor will challenge the town’s local government tonight to not only to become a leader in the fight against juvenile crime,...
Read more
Issue 42

Gas analyst for the Institute of Energy, Economics and Financial Analysis, BRUCE ROBERTSON in this OpEd says as export partners pull out, Origin and...
Read more