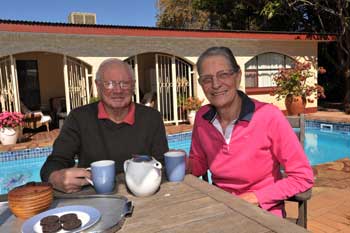 “Community water rules” – does that sound like you’re going to be told you can only water the garden twice a week or only use a bucket to wash your car? Not in Alice, not yet anyway. Alice Water Smart, a $15m project funded by the Australian Government, wants the town to formulate its own rules for using water more efficiently. But this won’t force you to change your lifestyle and the rules will be voluntary, more a guide to maintain “what you’ve got” or get you “what you want to have”, says project officer Liz Locksley.

So it’s not necessarily the end of green lawns and swimming pools in the desert, but rather, if they are what you want, it’s about getting smarter in how you manage them. The project offers free water efficiency consultations – they’ve done 560 to date. They’ve been for all sorts of properties, says Ms Locksley, from some belonging to the town’s highest water users down to apartments with very small gardens.

Alice residents are the highest per capita water-users in the country and we come close to, and even sometimes exceed the cap on our public water supply (based on its “sustainable yield”). Householders, not industry and public services, are responsible for two-thirds of the total usage. The Water Smart consultations have reinforced what was already known about that: gardens take about two-thirds. Of that about half can be saved without changing the user’s lifestyle preference, says Ms Locksley, simply by being more efficient.  The basic motto is “water deeper, longer, less often” but the consultations give you the detailed advice on how to go about this for your particular type of garden.

Another significant contributor to waste is leaks, accounting for about quarter of  the “opportunity for savings”.  Smaller changes make up the rest of the opportunity, things like dual-flush toilets, efficient shower-heads, adjusting the evaporative air-conditioner bleed rate, buying water-efficient washing machines and dishwashers.

The target for Alice Water Smart is to reduce use by 1600 million litres pa, the equivalent of two months’ of current usage. Ms Locksley says they want to work with a bottom-up approach, getting the community to embrace this goal and the “rules” about how to achieve it. She says “social marketing” research backs this approach and that “top-down regulation” elsewhere hasn’t necessarily achieved its desired outcomes.

“Our general finding from the consultations is that people do want to be smart about their water use,” she says.

If the town takes on the rules, it will be an Australian first and Alice’s contribution to the UN’s International Year of Water Cooperation in 2013.

A Citizens’ Advisory Panel is being set up to guide the process and the Town Council was asked last night to nominate a representative.  A number of public meetings will be held in the near future to take the process further.