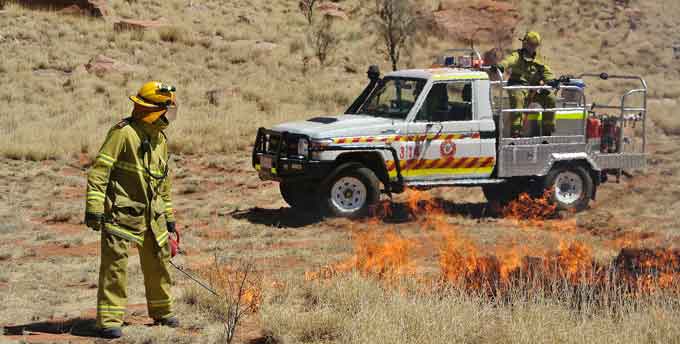 Fire authorities will be training unpaid volunteers to become arson investigators after last year 41% of the NT was burned, an area twice the size of Tasmania.
It only gets as bad as this every 40 to 50 years.
Up to 80% of the fires had been deliberately started, says District Fire Officer Southern Region Dave Letherby.
Chief Fire Officer Steve Rothwell says four people in The Centre will be trained in a course starting in a fortnight’s time.
They will “be able to investigate fires in their own area,” he says, and if they suspect foul play they will alert on-call police investigators.
The volunteer investigators “are known in the community, part of the community, they will actually go out and investigate the fires.”
The system will need the public’s help, with information such as rego numbers and descriptions of vehicles and suspects.
“Arsonists operate on a pattern,” says Mr Rothwell, and the new initiative “will break that pattern down”.
He says it’s part of the national initiative to stop firebugs: if someone dies in a fire deliberately lit, the arsonist will now be tried for murder.
Around the nation, some 30,000 fires a year are deliberately lit, at a cost to the community of $1.6b.
An arsonist’s usual profile is being male, in the 25 to 30 age bracket, with a low socio-economic background, and “maybe a bit of a disturbed background,” says Mr Rothwell.
The question begs whether the campaign, whose motto is “if you see something, know something, then say something,” has a bark that is worse than its bite.
Asked how many arsonists were prosecuted last year, Mr Rothwell said there were “a few prosecutions last year. Bushfire arson is a hard crime to detect. Those who were prosecuted were put on good behaviour bonds.” (The News has asked for more details.)
He says this year’s message is: “If you do want to commit arson we will catch you and a penalty will be applied.”
Mr Letherby says: “I know they caught four or five people and I’m not sure where it went from there.”
Asked whether a motorist would be prosecuted after driving his car on the wheel rims, with sparks setting ablaze a section of the West MacDonnell Ranges national park on a 30km front three weeks ago, he said: “I’m unaware of this. This is probably a question for the police. It is in the Bushfire NT District.”
Mr Letherby says the West Macs, where fire has already been raging in the past few weeks, are likely to have an “average season because that got burned fairly hard last year”.
Hazard abatement activities are being or have been carried out around the main population centres, and there are two more Bushfires vehicles in The Centre than last year.