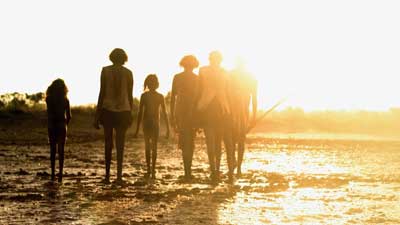 How could a man designated Protector of Aborigines end up leading a revenge party that would shoot at least 31 of them, including women and children, and probably many more, in retaliation for the death of one white man? It is a question that preoccupies a white Australian audience but the film Coniston, directed by Francis Jupurrurla Kelly and David Batty (the film-makers of Bush Mechanics fame, pictured below left), does not try to answer it.  Nor does it look in much detail into the broad context of the infamous event it is concerned with – the last white on black massacre in Australia, starting at Coniston, about 250 kms north-west of Alice Springs, in 1928. The one hour documentary, that includes dramatised sequences, focusses instead on capturing the oral history of the massacre held by Warlpiri, Anmatyerr and Kaytetye people. The primary audience it has in mind are the Warlpiri, Anmatyerr and Kaytetye of today and into the future, so that the story won’t be forgotten.

Many of the speakers in this film are the descendants of the massacre victims; some few are survivors, young children at the time. One is Albert Jakamarra Wilson, the son of an Aboriginal tracker, Alec Wilson, who worked for the revenge party.  Others who take part in the dramatised sequences are the descendants of Bullfrog, the Warlpiri man acknowledged as the killer of the white man, Fred Brooks, a stockman  turned dogger.

The premise of the film was described by co-director Kelly, a Warlpiri man from Yuendumu, at its Alice Springs screening on Monday: “It’s all about white Australia but we got black histories.” He had started on this project 30 years ago, interviewing the son of Bullfrog, who could remember hiding in a cave with his father when the revenge party was searching for him – we see some of this grainy footage and a handsome young Kelly without his signature dreads. According to Bullfrog’s son, the revenge party went past but Alec Wilson went inside and spoke to Bullfrog, without realising that it was him, advising him to wait in the cave until the whitefellas went past (effectively saving him).

Some time is spent on charactersing Bullfrog. He was known as “the whitefella killer”; he did “the wrong thing” but he was “a good bloke” although a “wild fella”; he was “a cheeky man, a fighter”. Some speakers have him boasting of his deed, saying “leave me alone, I’m a murderer” and “I can kill a white man”. Kelly is urged to “make the film of that white man killer so the whole world can see”.

In a dramatised sequence the film has Bullfrog sending one of his two young wives to ask Brooks – the first white man he and his family have seen – for tobacco. The commentaries about this focus on the sexual exchanges between the white and black populations. White men came with their sheep and bullocks but “left their wives overseas”; this meant they were on the lookout for black women, and not “middle-aged ones”; like someone going for “a brand new motor car” they always looked for “the beautiful ones”. The speaker, Ned Jungarrayi Kelly (whose father died in the massacre), showed what he meant by cupping both hands under his breasts, greeted with hilarity by the audience. A very elderly woman, Myrtle Napurrula Dixon, spoke of the many single white men who “became our boyfriends”.

While all this is related, Brooks puts Bullfrog’s young wife to work around his camp and ultimately takes her into his tent for sex. There is no suggestion of force in the film; she appears to go willingly. Bullfrog meanwhile gets into a jealous rage, exacerbated by a relative’s teasing, it is suggested. He grabs his axe and boomerang and, together with a relative, kills Brooks – “chopped him up”.

A speaker comments that everything got “confused because of that woman”. Brooks “should have asked”. White men were greedy, “going through woman after woman”. Bullfrog’s wife flees the scene, he was going to kill her too – “she just kept running”. So did Bullfrog – “he left his [other] wife and kids and walked off”. 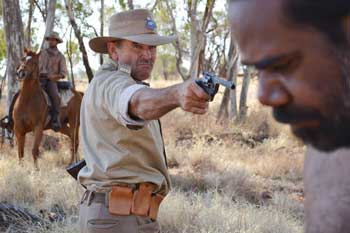 The film has Alec Wilson discovering Brooks’ partially-buried body. He informs police and he is told by Mounted Constable George Murray, the Protector of Aborigines, that he must go along with him to track down Brooks’ killer. The search party soon turns into a revenge party: random groups of Aborigines are ordered to drop their weapons “in the name of the King” and when they fail to do so, they are shot. Albert Wilson says that his father did not go along with this; his father said to Murray that people should be given a chance but was told to follow Murray’s orders.

Bullfrog sang “magic songs” to keep his pursuers at bay and sang away his footprints, we are told: he was “a tricky one”, one old man comments with a chuckle. A woman, Dora Napaljarri Kitson, says her father encountered the party and deflected their bullets with his shield and magic until they had no bullets left.

In their travels the film-makers visit the grave of Fred Brooks. Kelly’s assistant comments, “Poor thing”, but Kelly emphasises the greed of white people and their lack of respect. The film stresses that this was drought time and access to water was critical. Brooks was camped at one of two remaining soakages in the area where Bullfrog’s family retreat to, passing into their neighbours’ country. Brooks’ former employer, cattleman Randal Stafford had also claimed a water source for his enterprise.

The revenge party was on the rampage for an initial two weeks and later Murray returned with another white man, Nugget Morton, and again Alec Wilson. Morton had been attacked by an Aborigine but had ultimately got the upper hand and killed him. Now others would also pay with their lives, as the party heads north, hunting down and shooting Aborigines “like dogs”, says Albert Wilson. This goes on for a period of three weeks. A speaker reflects that the victims, as they tried to flee, must have wondered why they were being shot at.

An old man, a survivor, Johnny Jupurrurla Nelson, comments that to this day people are “too sorry” to move back to their country. They might visit but they don’t want to stay. He was a baby at the time; his mother hid him in some bushes and ran.

As the film-makers travelled around, collecting their interview material, Kelly learns from one speaker that his “mother’s father” died in the massacre. He hadn’t known that before. He is visibly moved and angry. 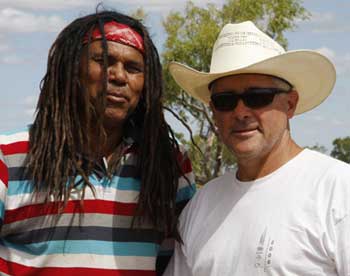 We are briefly told, in writing, that a Federal inquiry found that the shootings were justified, no Aboriginal witnesses were called, and Murray was returned to his position. The film doesn’t end on this note, however. We return to hear speakers evoke how present the story still is for them: “We still worry about it, all those dead people’s stories”; their “blood was dripping in our land”. Kelly briefly sums up the aftermath, ending with people moved onto government settlements, with no “justice” ever delivered – it’s the “missing word” from the story, says Kelly. And finally, we see a photo of Bullfrog who was never arrested and lived on until 1959.

The story is told with conviction but also with a certain matter-of-factness and at times, humour. In other hands dramatic techniques may have been employed to heighten the brutality and tragedy of the events. Although there were scenes of people being mown down, including little children, the tone was sober and the film was not a distressing viewing experience. It fulfills its mission to record the perspectives of the people whom these terrible events directly affected, even to the present time, as well as to engage today’s young people in the story. There are some very effective scenes where Kelly is casting people in certain roles and directing them in the re-enactments. They are funny and enlivening and pay tribute to people’s resilience. Perhaps that is a kind of justice, that people have delivered to themselves.

Coniston was co-produced by PAW Media (based at Yuendumu) and Rebel Films (Melbourne).

Facebook
Twitter
Pinterest
WhatsApp
Previous articleCountry Liberals 'not ruling out' a floor price for alcohol
Next articleLETTER: A lot of hassle for a litre of oil – motor home tourist won't spend any more money here.