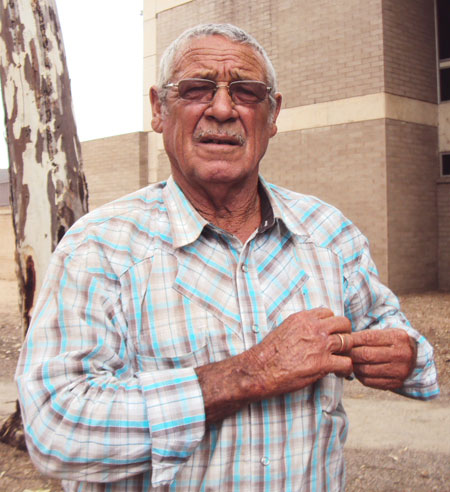 For the first time this week some detail emerged about what allegedly happened at Ilpurla Outstation last year that led to Barry Abbott (pictured), former Senior Territorian of the Year, facing charges of aggravated assault and deprivation of liberty.
Mr Abbott and his four co-accused, all members of his family, pleaded not guilty to all charges in the Alice Springs Magistrates Court on Monday. Their hearing is set down for December but defence lawyer Russell Goldflam had asked for a hearing to deal with legal argument.
How could this happen without some factual context, Magistrate John Neill wanted to know. So the briefest outline of agreed facts was presented on Tuesday afternoon.
This included that seven of the complainants were aged under 18 as of October 9, 2011, while two were aged over 18. That the seven were “children” (in their mid-teens) was critical to Mr Goldflam’s argument that a particular defence is available to his clients in relation to some of the charges of deprivation of liberty. That defence justifies the use of force – providing it is not unnecessary and not likely to cause death or serious harm – in circumstances where a person in loco parentis is using such force to “discipline, manage or control” the child.
The defence is provided for in one section of the Criminal Code, while the charges are laid under another section, which also outlines possible defences for those charges and in some respects is not well drafted, argued Mr Goldflam. Mr Neill said that Mr Goldflam’s attempt to “widen the safety net” for his clients was understandable. He will give consideration to the arguments for and against (the latter made by prosecutor Stephen Geary) and give his decision on September 18.
Other agreed facts were that all the defendants were employed by the Ilpurla Aboriginal Corporation, which was running a residential rehabilitation facility mainly for male youths referred to them by the courts, CAYLUS (Central Australian Youth Link Up Service, an arm of Tangentyere Council), the government’s Alcohol and Other Drugs Services, individual families and other agencies in Central Australia and interstate.
Mr Abbott is the director of the corporation. Only the defendants were present at Ilpurla at the times of the alleged offending and they had sole responsibility for the complainants.
The court had previously heard from Mr Goldflam that there were three separate incidents of alleged offending.
In relation to one of them, three defendants were present, not including Mr Abbott Senior. His daughter Valerie Anne Abbott was in charge, with Barry Shane Abbott and Shakira McCormack also on duty. The complainants were put into a weldmesh “cage” on the back of a vehicle. The door was secured and they were not free to leave. They were allowed to leave the cage some hours later.
This was as far as the agreed facts went.
Mr Goldflam had earlier given “a thumbnail sketch” of the circumstances which led to the complainants being put in the cage.
The incident occurred in the middle of the night. The seven youths and two young men were involved in petrol sniffing – forbidden, of course, at Ilpurla. Two of the youths burnt themselves in the process. One of them, together with seven others, was put in the cage and all were let out some time later that morning or by early afternoon.
These events have resulted in nine counts of deprivation of personal liberty charged jointly against the three defendants and two counts each of “failure to provide the necessaries”. The latter charge pertains to the staff’s response to the two youths who were burnt. One suffered “full thickness” burns, the other, partial. They were not take to hospital until two or three days later. Ultimately they were evacuated from Alice Springs for treatment. One required skin grafts.
Mr Goldflam said there was no dispute that the burns amounted to “serious harm”. However, they were given First Aid at Ilpurla and there was some consultation by Ilpurla staff with medical staff at Kings Canyon, he said.
The charges involving Mr Abbot Snr occurred earlier. He is alleged to have assaulted two under-age youths and locked them up in in the back of an abandoned vehicle “something like a paddy wagon”. Damien McCormack also faces charges over this incident.
The aggravating factors in the assaults were read out when the defendants were charged. They concern the age of the complainants, that they suffered harm and that they were threatend with a weapon, in Mr Abbott Snr’s case, a stick. The agravated assault charge aginst Mr McCormack was withdrawn, as was one count against Mr Abbott Snr.
Mr Geary said that no serious harm had resulted from the assault charges in all incidents.
Mr Goldflam said no medical treatment was sought or required as a result. Mr Geary said there is some medical evidence but he “might not lead it”.
Counts of “negligently causing serious harm” against Ms Abbott, Ms McCormack and Mr Abbott Jnr were all withdrawn.
The third incident occurred after the incident with the burns and concerned the same two youths allegedly assaulted by Mr Abbott Snr. On this occasion they ran away from Ilpurla. When they returned it is alleged that Mr Abbott Jnr assaulted them (threatening them with an electrical cord) and locked them up, with Mr McCormack and possibly Ms Abbott allegedly assisting in the locking up.
All incidents are alleged to have occurred between August 8 and October 9 last year.